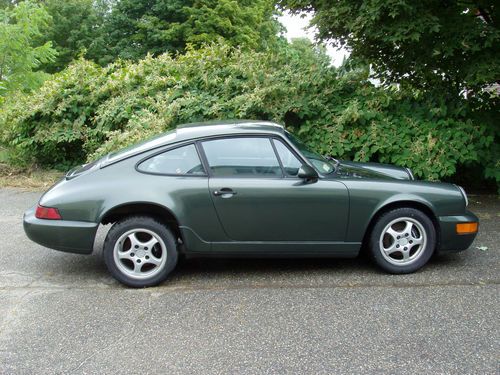 This is a 1992 Porsche 911 C2 sunroof coupe.  It is a project car and is not running.  It has been off the road since 2005.  The car developed a valve problem and the owner who was a mechanic removed the engine and transaxle, disassembled the engine, had the cylinder heads professionally rebuilt and then lost interest.  The car appears to be complete.  The car is green with a grey leather interior, has electric sunroof, power seats, power windows, power mirrors, air conditioning, left and right air bags, and all of the standard Porsche features.  In addition to the engine work, it will need a left outside door handle, a spare tire/wheel, and two new fog lights.  There may be other items that I am not aware of that may need attention as well.  You can see the exterior condition as I have taken pictures of most of the areas that will need attention.  There is also a dent in the left rear quarter panel that does not show up in the pictures.  The interior is in pretty good condition.  This is a great base for a race car or street hot rod.  It is after all a 3.6 liter engine with a G50 trans.  This car is being sold as is, as shown with no warranty or guarantee of any manner shape or form.  A $500.00 non-refundable deposit is due within 24 hours of the close of the auction.  The deposit can be made via PayPal.  Final payment is due within seven days of the close of the auction.  Sorry, but due to the proliferation of forged bank checks,I will only  accept final payment via bank transfer or cash upon pickup.  I will not accept PayPal for the final payment.  The buyer is responsible for shipping or pickup.  I can store the car for up to two weeks after the close of the auction, however, all payments must be made as stated above.  Thank you.