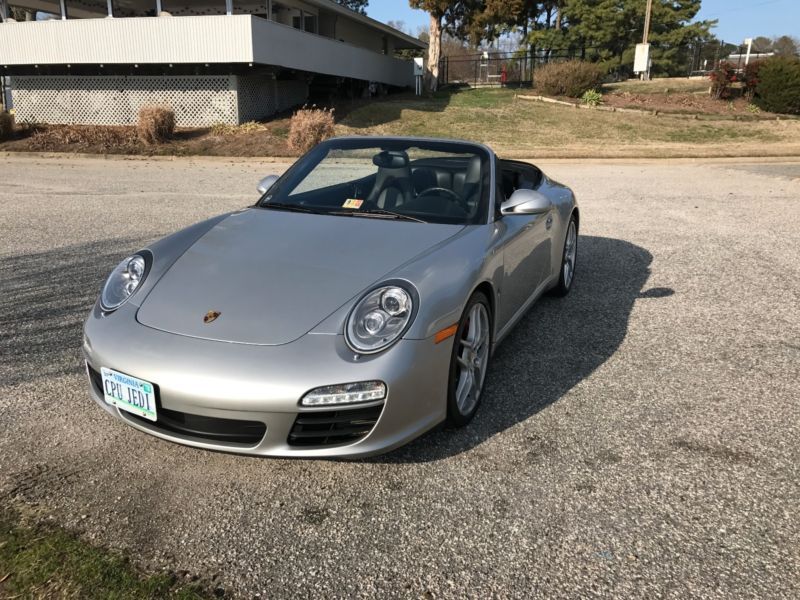 I am always available by mail at: annelleapprecissi@britishtalent.org .

2009 Porche 997.2 911 Carrera S Cabriolet
Original Paint/$110K MSRP/Sport Chrono Plus
6-Speed Manual/Direct Injection Engine Gen II
VIN# WP0CB29979S754468
22,888 Miles
380 HP / 310 lb/ft torqe
Price: $53,999.00
Arctic Silver Metallic with Black Top
Full Black Leather Interior
6-Speed Manual Transmission
3-Owner Porche
No Accidents / Original Paint
PCA Member Owned
Clean Virginia Title
Located in Newport News, VA 23606
Clean Autocheck Background (Score 93)
Original Window Sticker
All Manuals and tools
Power Comfort seats with driver memory
Self-dimming mirrors
Heated Seats
Seat ventilation / cooling
Wheel caps with colored Porche crest
Dynamic cornering lights
Bluetooth phone interface
Bluetooth music streaming
Sports Chrono Package Plus
Navigation module for PCM
Bose high-end sound package
XM/Sirius radio
6-Disc CD/DVD changer
Floor mats in interior color
Universal Audio Inteface
Short shifter kit
Rennline Peddal kit
Hard wire Escort radar kit
Tires new 7/13 @9K miles, about 70% life remaining
The original owner drove the car about 4-years before trading it into his local dealer. The second owner was a
long time Porsche enthusiast and asked the dealer (AutoKennel) to help him find a nice late model Porsche
convertible as he had recently retired and was moving from Southern California to Arizona. The dealer found this
car in June of 2013 with about 8,500 miles, and had it thoroughly inspected by a local Porsche shop before it was
purchased. The Porsche dealer reported it to be in excellent condition, so the second owner purchased the car, and
flew to Dallas, TX to pick it up and drove it to his new home in Phoenix, AZ. For the next 3-years, he enjoyed the
car and took it on several weekend trips. The second owner had recently moved back to Orange County California,
and found that he just wasn’t using the car, and didn’t have space to continue to keep it, so he asked the
dealer AutoKennel to list it for sale.
While the second owner owned the car, he installed the short shift kit, new Rennline pedal kit, hard wire Escort
radar detector kit, new battery, Michelin Pilot Sports tires (7/13 @9K miles), with 70% life remaining, oil
service, brake flush, and inspection (12K miles / 7/2014 at Porsche dealer). He had an oil service and inspection
in August 2016 at Hergesheimer motorsports and they found the car in excellent condition, and needing nothing. The
rear brakes are at 90% life left, and the front brakes at 70% life left.
The 997 S is in great condition. The paint is all original and verified with paint meter. It shines beautifully
and shows minimal signs of use. The wheels are in excellent condition with no rash and the tires have more than
half life remaining. All the glass is original as well. There are some minor nicks on the windshield, but no
cracks or significant chips. The soft-top is near perfect with no tears, rips, or signs of wear. The one-touch
function of the top works flawlessly. The front nose has clear bra installed when the car was new, and it shows
some slight discoloration. The interior is equally nice. The leather seats look great with hardly any wear, just
some minor wear on the driver seat exit bolster. Everything looks, feels, and smells fresh. All the buttons,
gauges, and other controls function properly and show no wear. All in all, it is clear that this example was
always garaged and used mostly for light weekend use.
The Porsche drives fantastically and is exactly as you would expect. It feels extremely tight and still new. The
clutch operates properly with no slipping and the car shifts very smoothly. The power and braking is spot on.
This example is ready for anything from daily use to weekend spirited open top driving.
This car has spent it’s entire life in the dry climates of Texas, Arizona, and Southern California. It has not
been driven in ice or snow and has no corrosion whatsoever.
The 911 comes with owner’s manual, factory toolkit, original window sticker, 2-keys, wheel lock, Porsche flat
repair kit, and windscreen.
I purchased the car in September 2016 from AutoKennel, and had the car shipped to Virginia in an enclosed carrier.
The car arrived clean and easily passed the Virginia State inspection. I had the car inspected and driven by local
sports car expert Jim at Tire America in Newport News, VA, and he indicated it was an extremely nice car. I
purchased the car with 21,887 miles, and put about a 1,000 miles on the car.