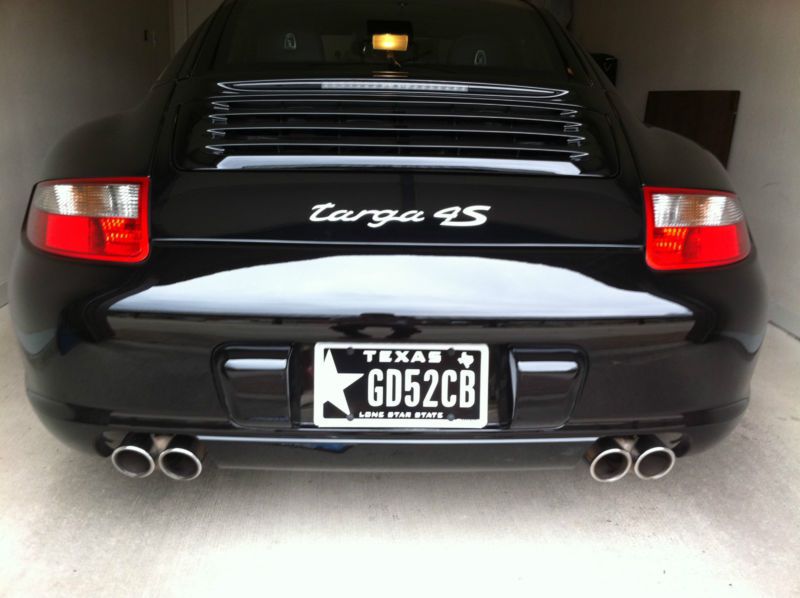 This 997.1 TARGA 4S is a rare find that is heavily equipped with turbo wheels, sport chrono, full leather, aluminum
shifter/brake handle, stainless illuminated door guards, Porsche crest in headrests, Kenwood touchscreen with hands
free bluetooth/microphone, NAV, back up camera, XM, HI-DEF radio, CD, plays DVD's while moving, Pandora, Fabspeed
Muffler Bypass, new black chrome quad exhaust tips. Sounds like a Beast! Stock mufflers/tips, and stock radio are
in storage and come with the car. Only $300 labor at the Porsche dealership to bolt the stock exhaust back on for
the driver who desires the traditional quiet Porsche drive.
The car was certified from Porsche North Houston. The window sticker was $112k. I purchased it with 29k miles in
2011. This has been a weekend driver for me as I have averaged about 2800 miles per year. It is in very good
condition inside and out and engine is spotless. it has never slept outside, seen snow and I meticulously hand wash
the car every 7-10 days. Never been through a car wash. Also no food or drinks outside of water ride in the car.
It has never been tracked, wrecked, and has a clean car fax. I have all the service records in a file. All
major/minor service is up to date and the next service needed is simply an oil change at 50,000 miles. Last summer
I replaced the adhesive rock guards that sit on each side before the wheel wells. Over time they yellow and now
the new ones really freshened up the look of the car. The black quad tips really woke up the back end as well.
Enjoy the all glass targa top open or closed and get the feel of a convertible with no rag top. The car is in
Dallas and has been serviced at Park Place Porsche since i have owned it.