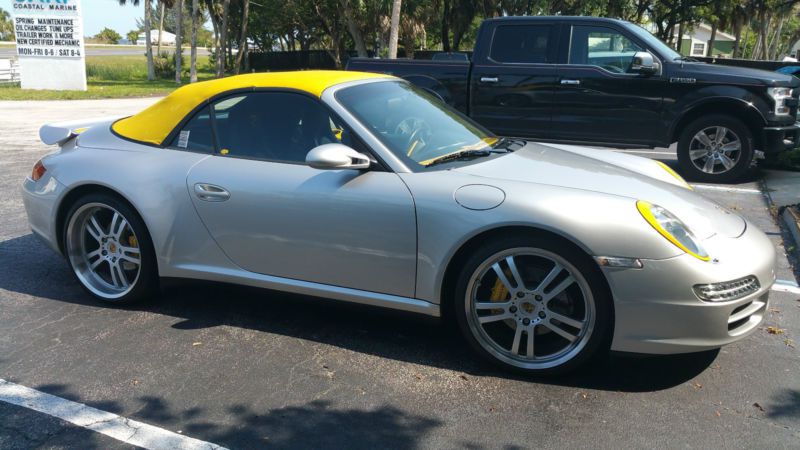 Just email me at: capaldo71@zoho.com .

2006 Porsche 911 Carrera 4 Convertible. Custom features which I added to the car since 2013 include:
Speed Yellow Convertible Top,
Speed yellow interior trim painted in 3 stage urethane
Custom interior which includes new full leather with Speed yellow stitching with diamond stitching on seats, door
panels and lower portion of dashboard. The entire interior of the car was removed and recovered.
VF Engineering Supercharger and custom tune by the owner of VF bringing the Horsepower up near 500. Note: The car
is very fast accelerating.
LED front bumper Marker light/turn signal/daytime running and LED rear tailights and custom yellow vinyl surround
on headlights.
K40 concealed Radar detector front and rear with front and rear laser protection.
Tooki Handsfree Cellphone add on to PCM
Sirius/xm Satellite added to PCM
Fiberwerks Custom Rear Spoiler
Aasco Lightweight aluminum flywheel which give rev matching
Clutchmasters stage 4 Clutch
The car also has Ceramic Brakes, Champion RS128 20" Wheels with deep offset in the rear, The custom features
since 2013 total $65k. Car is driven as a daily driver so the mileage may be higher by the time it sells.
Since I have had the car I have always maintained it with Porsche of Melbourne FL and they did the install on the
supercharger/tooki & satellite.
The interior and Custom top was done by a local upholstery shop.