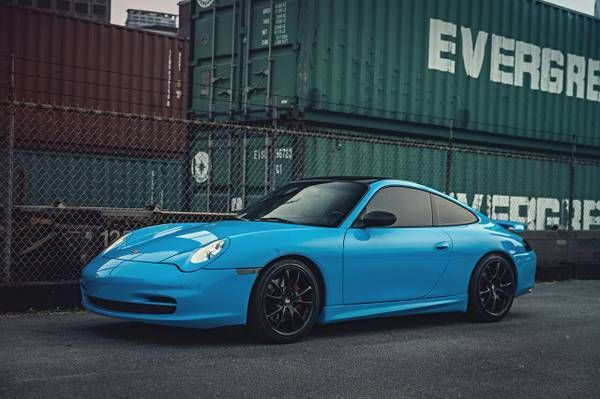 If you have any questions or would like to view the car in person please email me at: staciskkuks@delboys.com . Looking for hot ride this summer? Look no further
I have Baby Blue Porsche 911 a.k.a 'Smurf' Fully done out!
*Low miles *No accident *Porsche Club of America member owned(Second owner)
Up for sale is my one of kind beautiful 2003 Porsche 911 Carrera
Tastefully done out in Baby Blue 'Alize Blue'
This is 996.2 face lifted version with 3.6L engine and upgraded visual appearance (2002~2004)
I'm proud Porsche club of America member I have owned this vehicle since 2007.
It was one of famous Casino owner's vehicle in Las Vegas.. well kept after with full warranty.
During my ownership 911 was serviced at Porsche dealer only. I invested $20000 in mods and upgrades.
One of the most enjoyable, tastefully modified cars I have ever driven, and turns heads all day long.
Due to updated appearance folks ask me this is new 911 time to time.
Never been in any accidents, Car is immaculate shape overall.
Carfax records included as well.
Only driven in summer/weekend. never driven in bad weather.
I'm relocating my job overseas I have to sell my beloved garage queen.
Here is brief spec about the car
Engine:Vario Cam plus flat V6 3.6L, not the 3.4L version offered during 1999-2002
IMS Shaft Bearing UPGRADE performed @ MCL Porsche with upgrades its pushing 380HP strong power.
Bullet proof engine, solid transmission. Drives like dream.
Footwork: TECHART sports suspension setted on Black 18" GT3 Rims with 80% all season tires
Red turbo brakes with cross drilled rotor, new pads.
Lights: 6000K Super white Xenon, Rear Smoked Tail lights
Bodywork: Babyblue 3M wrap ($5000) , GT3 aero dynamic($5000), Tech Art type III rear spoiler($1500), Lummar Ceramic
tint Front 50% Rear 20% ($800)
(originally basalt black can be reversed easily)
Sound System: JVC 12" Big wide screen dash, DVD, MP3 , Bluetooth, Navigation ,USB ready (top of the line)
Upgraded Pioneer speakers, Pioneer Amplifier in the front trunk ($5000) sounds much
better than stock BOSE system. crispy and clear.
Rare factory options include: Alcantara headliner, power sunroof, 3 spoke steering wheel.
Recent Service: New Clutch ($3000), Mobil 1 Synthetic oil change 10-30( always every 3000 miles or 2 month which
ever comes first) , New brakes ($1500) service history included
911 needs nothing but a new great driver !
If you have any questions, send me a message anytime.