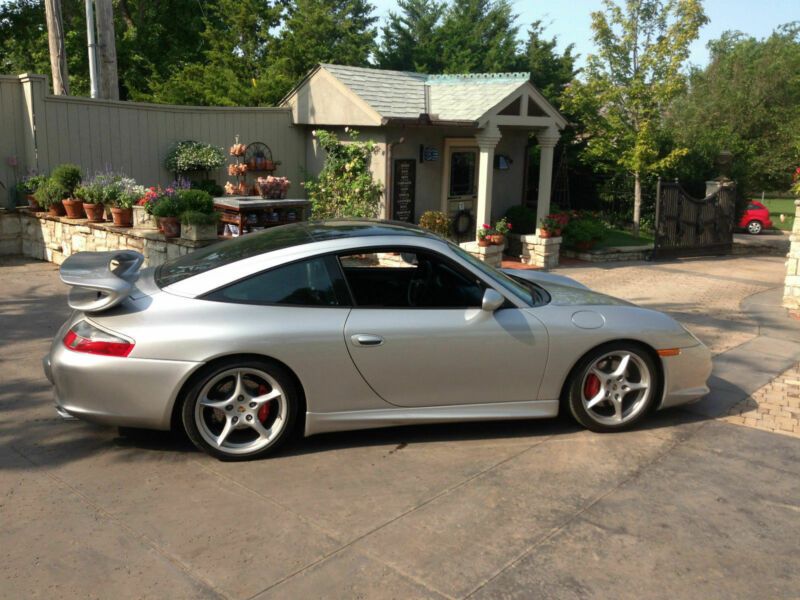 This is a very special Porsche. This Targa is a very unique 2002 Arctic Silver Porsche 911 Carrera Targa with only
13,000 miles.
This Targa came with the factory Technic Package and has been very tastefully customized with body and mechanical
parts to replicate a 2002-2004 996 GT3. This was done with a Jacquemond Aero Body Kit and GT3 rear wing, upgraded
red powder coated calipers and H&R Sport lowering springs with proper upper strut mount kit. The only thing that is
missing is the GT3 wheels.The body kit was installed by Mirror Finish in Oklahoma City who specialize in Porsche and BMW.
The workmanship on the install is excellent and the quality of the body kit is so high that it looks completely OEM
and the paint is a perfect 100% match. This car handles better than my stock 911 Cabriolet and actually has a
smoother more compliant ride, even with the lowering. In addition it has an Evolution Motorsports INTK996 Induction
System and Stage 1 Computer Tune done by Bob Dumont, Porsche Only Service also in Oklahoma City.
The Targa also has a custom audio system that was done without any modifications to the dash with an Alpine AM/FM,
MP3, SiriusXM Satellite and JL Audio 4 channel Full Range Amp and JL 6.5” 3-way speaker system with a JL 10”
Subwoofer. You can see the subwoofer install in the pictures. It looks like it was done at the factory, just
beautiful.

At 11,400 miles I had the IMS BEARING UPGRADED to the TuneRS Centers for Porsche DOF (direct oil feed) bearing. It
was more expensive than others but to me, offers the absolute best engineering of all.