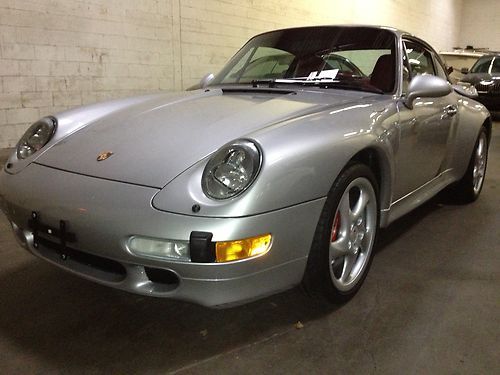 1997 PORSCHE 993 TURBO   ARTIC SILVER / SPECIAL ORDER RED LEATHER INTERIOR      20577 MILES   THIS TURBO HAS HAD ONLY TWO OWNERS IN ITS LIFE ,NEVER IN AN ACCIDENT ,HAS A CLEAN CAR FAX HISTORY, HAS BEEN METICULESLY CARED FOR, HAS EXTENSIVE SERVICE HISTORY , WHAT EVER IT NEEDED IT GOT, 15K MILE SERVICE DONE ,  NO LIGHTS ON NEEDS NOTHING, HAVE ALL THE BILLS , AS WELL AS BOTH KEYS,RADIO CARD,OWNERS MANUELS,AND ORIGINAL WINDOW STICKER,UNDER THE BONNET IS THE ORIGINAL SPARE AND AIR PUMP, HAS CLEAR BRA ON THE BUMPER AND LEADING EDGE OF HOOD, THIS TURBO IS 100% STOCK AND UNALTERED, LIST PRICE IN 97 WAS 114948.00  OPTIONS ARE LEATHER INTERIOR TO SAMPLE, ROOT WOOD SHIFTER AND HAND BRAKE,MATS WITH CREST,STEERING WHEEL IN MATCHING LEATHER,CD HOLDERS IN CONSOLE,WHEEL CRESTS,AM/FM CD PLAYER,AND FULL SUPPLE LEATHER FRONT AND REAR, IT RUNS AND DRIVES LIKE NEW ,IVE PUT ABOUT 200 MILES ON IT AND CAN SAY IT TRACKS LIKE ON RAILS STOPS LIKE ONLY A TURBO CAN SHIFTS BUTTER SMOOTHE LAST OF THE AIR COOLED TURBOS TRUELY AMAZING ANY QUESTION CALL JOHN 516 659 0596  AND ONE MORE THING PLEASE HAVE YOUR FINEANCES IN ORDER BEFORE YOU BID AND IF YOU WANT TO SEND AN INSPECTOR THAT IF FINE JUST TRY TO SEND ONE WITH A LITTLE KNOWLEGE OFAIR COOLED PORSCHE'S