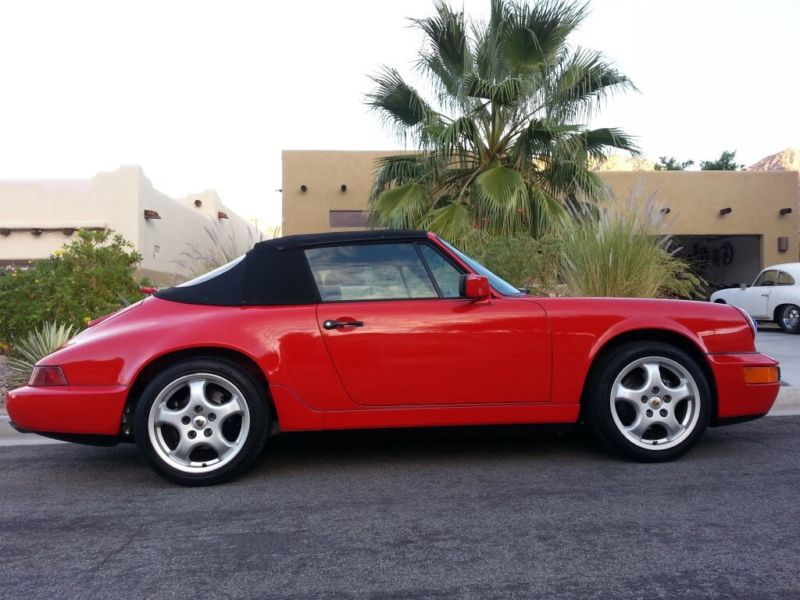 Please email me with any questions or requests for additional pics or something specific at: mauricembbrookman@ukwalkers.com .

This is an exceptional, meticulously maintained (receipts) factory original 964 Cabriolet C4 5 sp.
It is completely original with spectacular guards red paint. The car has never had any accidents or any kind of paint touch up, not even the bumpers have needed to be touched up. The underside and inner fenders are as clean as the rest of the car (photos).there are no scraps or dings on the underside floor pan and the car still has the plastic engine shield that is usually taken off and lost.
New tires 500 miles ago, new top from Porsche as the plastic rear window was starting to yellow and I don't like the look of a repair job so a complete new top was installed. Power top functions perfectly and seals tight. New brakes, rotors and clutch 800 miles ago (receipts).
This car has only seen 10000miles in the last 16 years. No drips, leaks or oil sweat no matter how long the car is parked. No modifications or aftermarket parts, everything used was OEM Porsche, only item not factory is the Kenwood CD player and it was installed with no extra wires, cutting or speakers, easily removed. All electrics work, no marks on the glass, all rubber is supple and in new condition. Panel fit is perfect for doors, trunk and engine lid. Lots of records, books, never used tool kit, spare and compressor. No road rash.