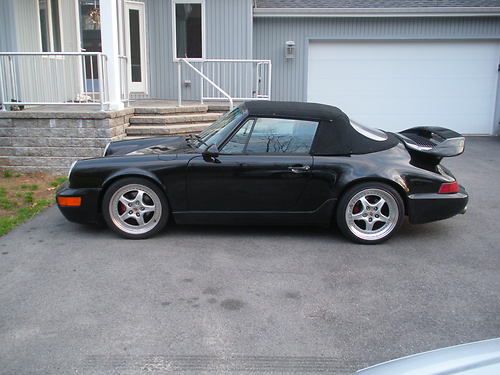 Condition: Used: A vehicle is considered used if it has been registered and issued a title. Used vehicles have had at least one previous owner. The condition of the exterior, interior and engine can vary depending on the vehicle's history. See the seller's listing for full details and description of any imperfections. ...
LOW RESERVE  *****      ESTATE SALE
EXCELLENT CONDITION
72000 MILES
INSIDE CLIMATE CONTROL STORAGE LAST 13 YEARS
POWER TOP,POWER HEATED SEATS, POWER WINDOWS,LOCKS
AFTERMARKET TURBO SYSTEM STAGE 1 PROTOSPORT EST.425 HP
18 INCH SPEEDLINES PAINTED CRESTS W/ NEW PILOT SPORTS
RUFF SPACERS
930 STEERING WHEEL, SEATS,TIE RODS, BRAKES
964 FACTORY BUMPERS,MIRRORS,SKIRTS ,LIGHTS
AFTERMARKET 3.6 RS TAIL
CUSTOM DUAL MILLE MIGLIA EXHAUST
ROLLBAR
MOMO PEDALS
CARBON SHIFTER
NEW INTERSTATE BATTERY WITH POWER CUTOFF
CONVERTIBLE BOOT COVER
PORSCHE CAR COVER INCLUDED
ORIGINAL BUMPERS,BACK SEATS INCLUDED
This vehicle is being sold as is, where is with no warranty, expressed written or implied. The seller shall not be responsible for the correct description, authenticity, genuineness, or defects herein, and makes no warranty in connection therewith. No allowance or set aside will be made on account of any incorrectness, imperfection, defect or damage. Any descriptions or representations are for identification purposes only and are not to be construed as a warranty of any type. It is the responsibility of the buyer to have thoroughly inspected the vehicle, and to have satisfied himself or herself as to the condition and value and to bid based upon that judgement solely. The seller shall and will make every reasonable effort to disclose any known defects associated with this vehicle at the buyer's request prior to the close of sale. The seller reserves the right to end auction early due to sale through other advertising venues.