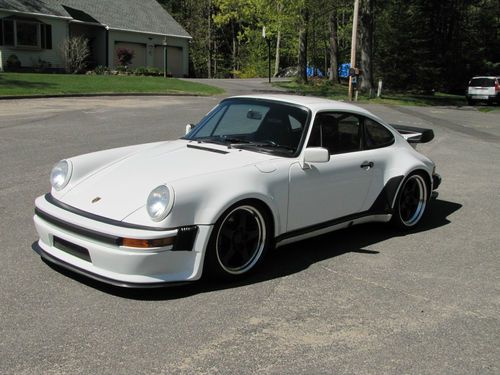 For sale is a 1988 Porsche 911 Carrera with rare factory M491 Turbo Look option.  Car is white with maroon interior, 73K miles, 3.2 liter 6 cylinder, 5 spd G50 manual transmission, factory limited slip, power windows, power locks, power sunroof, climate control.  Car has been meticulously maintained for the past ten years by a car enthusiast and is in excellent, almost new condition inside and out.  The car has been stored in a climate controlled garage and has never seen any rain or snow by either myself or the prior owners.  The body has no dings, dents or scratches and the original paint shines very well.  Interior is in mint condition with no stains, rips, tears, cracks in the dash, or other problems.

The following upgrades have been done or added to the car:

-Fabspeed Dual Exhaust -  Rear valance on passenger side custom fabricated for the dual exhaust setup, so there is a pipe exiting on both the left and right rear.

-All original parts come with the car except the original wheels and original brakes.

Car is sold as-is, where-is with no warrenties what so ever.  $700 non refundable deposit required upon auction end, with remainder due when the car is picked up (cash or bank check).  Car must be removed from my property within 14 calender days from auction end, or else the car will be relisted and sold to someone else. I HIGHLY ENCOURAGE all interested parties to come view the car in person prior to placing a bid or purchasing the car.  Comes with clear title.  Vehicle is located near Springfield, MA.