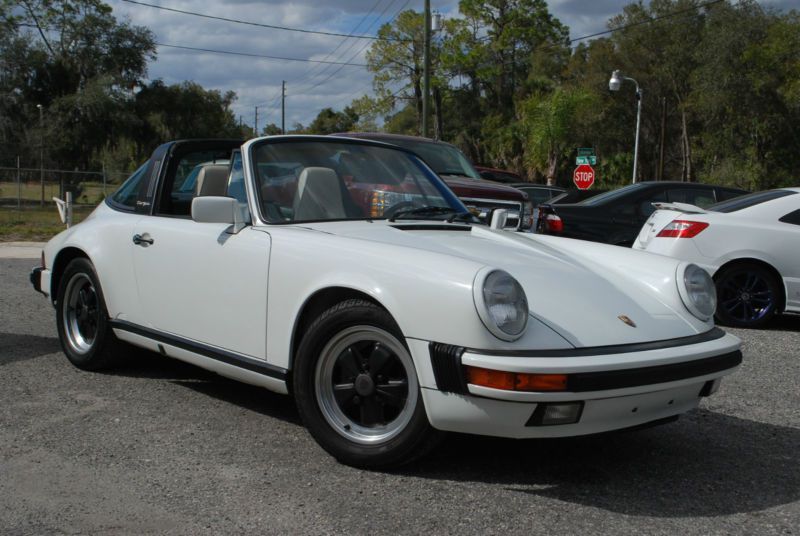 Feel free to ask me any questions about the car : andreeammashiah@ukpeople.com .

A beautiful, well maintained, air cooled 911. No accident history. All panels appear to be original paint. Targa top is
in great condition, fits tight and the liner looks like new. All 4 wheels are OEM Fuchs in great shape with
factory wheel locks and no curb rash or damage, and are shod with matching Michelin tires that have 8/32's or more
tread remaing. The car runs and drives great with correct oil pressure at all engine temps and rpm. Transmission
shifts smoothly and the clutch engages correctly with not chattering or slack. A/C is ice cold. Engine is dry and
looks great. All engine fittings look like new. Porsche tool kit, manuals (not original to car), factory car
cover and certificate of authenticity all present. Comes with factory key with working light plus an extra metal
key and the original wheel lock key. Cruise control is not currently working due to the cable end coming off. I
have ordered a new cable and it will come with the car. Everything else works as it should. Updated stereo and
speakers. Original radio is not present. Car was shipped from California to me and arrived without the service
record folder. I have duplicated some of the recent records with help from the previous owner, Brumos Porsche and
Suttgart Service of Williamsburg, Va and am waiting for additional records to arrive. I have the records I
received scanned and can provide on request. Dashboard has 4 cracks. They were difficult to photograph through
the windshield due to the reflection. If the car is purchased at or above the buy it now price, I will have the
dashboard recovered in factory correct vinyl or give the purchaser a $600 credit off of the final price to deal
with the dash as he or she may prefer.