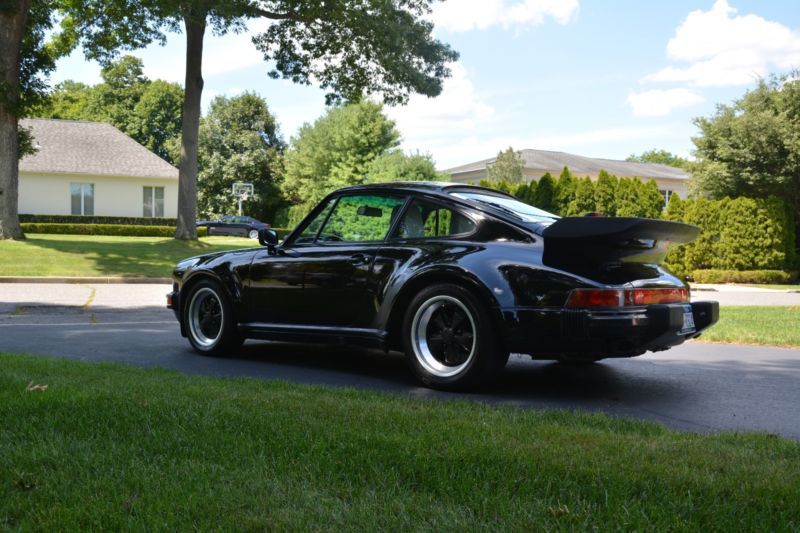 1987 PORSCHE 930/ 911 TURBO
PRICED RIGHT TO SELL!!!
-1 OF 720 PRODUCED IN 1987
-58K MILES
-ALL ORIGINAL PAINT- NO BODYWORK/ ACCIDENTS
-3 OWNERS FROM NEW
-ORIGINAL FACTORY BLAUPUNKT STEREO
-FACTORY SPORT POWER SEATS
-FACTORY FUCH WHEELS
-OPTIONAL LIMITED SLIP DIFFERENTIAL
-CLEAN CARFAX HISTORY
-CLEAR TITLE IN HAND
-INTERNATIONAL BUYERS ARE WELCOME
CONDITION:
-NO RIPS
-NO TEARS
-NO HOLES
-NO DASH CRACKS OR IMPERFECTIONS
-NO PETS
-NON SMOKER
-NEVER TRACKED OR RACED
-RUNS AND DRIVES EXCELLENT( NO OUTSTANDING ISSUES)
-NO LEAKS
-NO DRIPS
-ALL GAUGES AND CLOCK WORK PERFECT
-TIRES HAVE PLENTY OF TREAD
-NO SCRATCHES
-ALL FACTORY STICKERS & TAGS IN PLACE
-MINOR ROCK CHIPS ON THE FRONT BUMPER & MIRROR COVERS
-STAINLESS EXHAUST
-CLUTCH & SERVICE DONE 3K MILES AGO
-NEW BREAK CALIPERS AND ROTORS
-ALWAYS STORED IN TEMPERATURE CONTROLLED GARAGE
-HAND WASHED AND WAXED REGULARLY
* I HAVE DONE MY BEST TO DESCRIBE THIS BEAUTIFUL ORIGINAL PAINT PORSCHE , BUT PLEASE NOTE THIS 930 TURBO IS 30
YEARS OLD AND NOT 100% PERFECT. I OWN MANY PORSCHE'S, AND THIS IS TRULY A GREAT EXAMPLE . PLEASE FEEL FREE TO
CONTACT ME WITH ANY QUESTIONS.