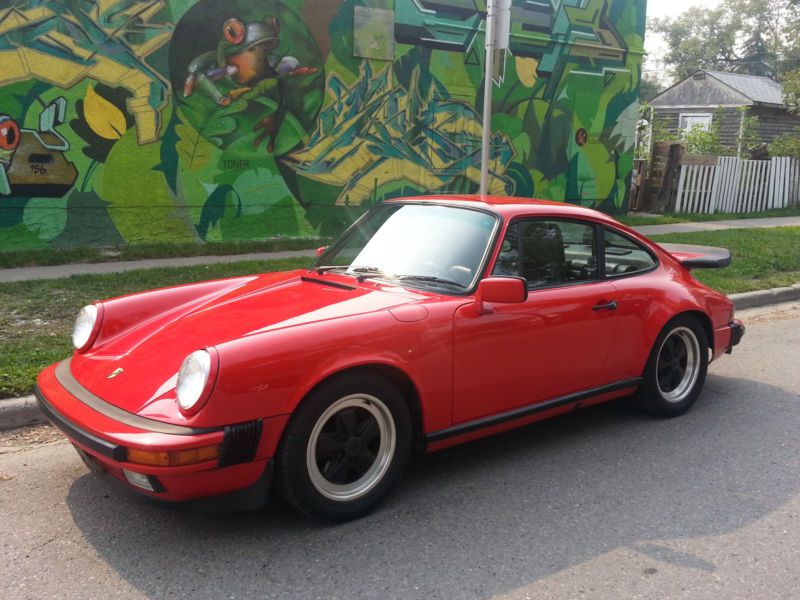 For more pictures email at: caseyckkissack@swindonfans.com . This is a survivor, 3 PCA owner, 91000mile Carrera with the G50 transmission. Completely factory original except
the radio, no modifications. This is a Canadian car purchased at the Porsche dealer in Vancouver BC., MCL
Motorcars. It is a dealer serviced car with records and a stamped warranty book from both Vancouver Porsche
dealers, MCL and Weissach Performance.
As mentioned there are no modifications or changes to this car, it is as it left the factory, right down to the
exceptional Guards red paint. A complete unused tool kit, warranty book, owners manual, jack,compressor and spare
are still with the car. This car was stored inside and not driven in adverse conditions and it shows. All panels
fit perfectly, original rockguard is still present on each of the fender lips as applied by the factory. One of the
many options the car came with is option code 027 which is a California version, this means the car will pass
California safety and emissions.
The car has been very well maintained by both Porsche dealerships and local Porsche independent service centers.
No leaks, rattles, noises. Smooth shifting, very responsive 3.2. It has the factory sport package which includes a
stiffer suspension, Carrera tail and front chin spoiler. All rubber parts are soft and supple.
The underside is clean and damage free, under the fenders there is no dirt or grime, the cosmoline is still in
place and all coatings are untouched. The Fuchs are clean and unmarked, no curb damage or rash. The paint is close
to flawless, a silky smooth shine, no rock rash on the nose, no damage to the rockers or chin spoiler. Windshield
has no marks.
The interior has leather seats which show very little signs of use, dash is perfect, no marks in the headliner. No
extra holes for speakers of other electronics have been cut into any part of this car. Full power option seats with
the comfort seat package. Sunroof opens and closes smooth, no leaks.
This is an extremely well preserved Carrera, never messed with. Hard to find a car from this era with its original
paint especially in this condition and a car that has been so well taken care of all its life. I am only selling to
make storage for my modest 13 Porsche collection. I only collect factory original Porsches, fortunately for the
next owner I have put this car up for sale to make room, hard decision as to which car show go but my collection is
mostly pre 1973.