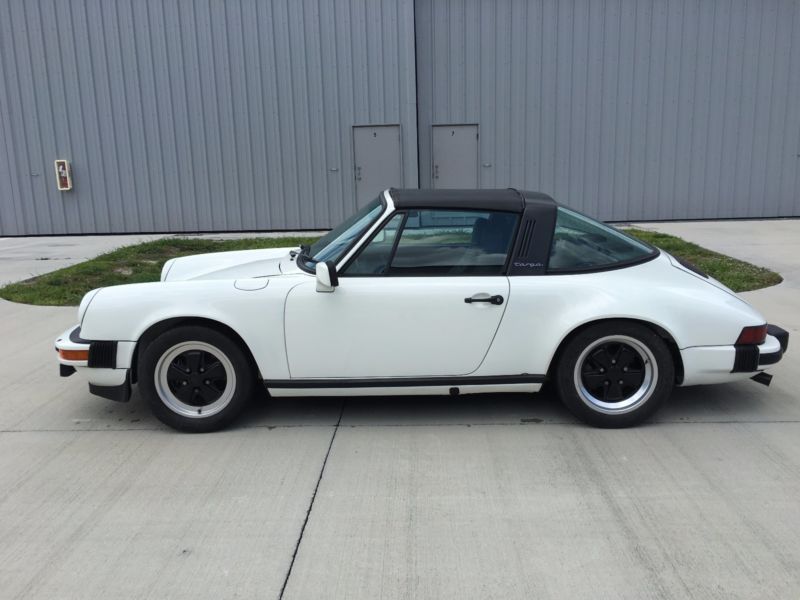 1983 Porsche 911 Targa
The car was actually built in Nov 1982, when I bought this car it has been garaged for many years and was not
running, the goal was to bring the car back to live no matter what or how much, the idea was to KEEP the car not to
flip it, but because I was relocated out of the country and the car is already not running for 6 months I decide to
sell it.
So, I sent the car to my Porsche specialist mechanic to disassemble the car completely and start to fix and renew
whatever it needs including the engine and transmission
I few weeks later he told me that the engine was in excellent conditions, with unbelievable compression in all
cylinders, and with no signs of oil leak (which is very difficult/ almost impossible for an air cooled 911) and
the borescope show no signs of wear or carbonization or any other problem with the internal parts of the engine, so
he sugest me not to rebuild an engine in that condition
We put the engine off the car and performed a very good service on the engine and engine ancillaries, among other
things
Here´s the parts and services performed in the car, that I can remember off:
ENGINE:
1-) New CIS Fuel Distributor
2-) All 6 New Bosch Fuel injectors
3-) All new thermostats
4-) All new Oil pressure senders
5-) All new gaskets and "O"rings
6-) All new Fuel Lines (from the fuel tank running inside the car thru the engine compartment)
7-) New Fuel accumulator
8-) New Fuel Lines from the accumulator to the fuel filter to to CIS
9-) New Fuel Filter
10-) New Air Filter
11-) New Oil Filter
12-) New Spark plugs
13-) New Valve cover gaskets, nuts and bolts
14-) Sand blasted and repainted cam covers
15-) Ultrasonic cleaned Frequency valve and WUR
16-) New belts
17-) New Voltage regulator
18-) Valve gap checked
19-) NEW SACHS CLUTCH KIT
20-) Sand Blasted and repainted engine tin
21-) New engine mounts
22-) New engine mounts washers
23-) New FUEL PUMP
24-) New fuel pump soft mounts
25-) Spark plug boots
26-) Engine was filled with original PORSCHE CLASSIC MOTOR OIL 20w50
27-) New Original PORSCHE battery
28-) New distribuidor
29-) New ignition rotor
30-) New throttle lever bushings
31-) New ORIGINAL PORSCHE insulation for engine compartment
31-) New ORIGINAL PORSCHE hot air hose
32-) New ORIGINAL PORSCHE hi-pressure oil hoses
33-) New ORIGINAL PORSCHE chain tensioners oil hoses
BODY:
The car was completely took apart and every part was repainted inside and outside with the original single stage
Glasurit paint then sand blocked to 2000 grit and polished to perfection.The paint job alone cost $8000,00
All the bad gasket was replaced with original Porsche parts
The body is straight as an arrow without a single ding
During the repaint process the the car showed no signs of previous accidents.
1-) New ORIGINAL PORSCHE windshield rubber
2-) "Smile" and bumperettes are also new
3-) New trunk and hood gas shocks
4-) New wiper blades
5-) New washer motor
6-) New ORIGINAL PORSCHE windshield washer jets
7-) New ORIGINAL PORSCHE fuel level sender
8-) New ORIGINAL PORSCHE fuel Tank Screen
9-) New ORIGINAL PORSCHE wiper washer hoses
10-) Rebuild shifter bushings
11-) New ORIGINAL PORSCHE shift rod boot
12-) New ORIGINAL PORSCHE Gas filler protective flapper
13-) The targa top is in very good shape I'll say 8,5 out of 10
INTERIOR:
The interior was completely rebuilt!
1-) New real leather seats , when I first looked to the seats it appear to me a little bit loose, but the
upholstery shop told me that with time, under the sun and use the leather seat covers will tighten up
2-) The dash has was recovered with german vinyl and looks great with no cracks.
3-) The steering wheel was also professionally re-covered with high end leather.
4-) The door pockets are super straight
5-) New carpet
SUSPENSION:
1-) New front suspension bushing
2-) New front shock insert
3-) All 4 calipers rebuilt
4-) Master cylinder rebuild
5-) ORIGINAL PORSCHE DOT 5 brake fluid
The tires I was about to replace them but did not had the time to do it, they appear to have 70% live left, but
they are old and a new set will make difference.
6-) New ORIGINAL PORSCHE tie rod ends
7-) New Front wheel bearings
8-) New ORIGINAL PORSCHE Sway bar bushings, front and rear
9-) The original collapsible spare tire and the original jack is included
PROBLEMS: The car does not have any speakers, they were in bad shape and I did not had the time to buy new one and
install it.
The A/C is not working right now just because the fan blower motor need to be replaced ( the new motor is already
bought and in the glove compartment, I just did not had the time to change it)
1-) Rebuilt compressor
2-) New compressor belt
3-) New air dryer
4-) System was vacuum cleaned
5-) Need a fresh charge of Gas and install the provided, blower motor