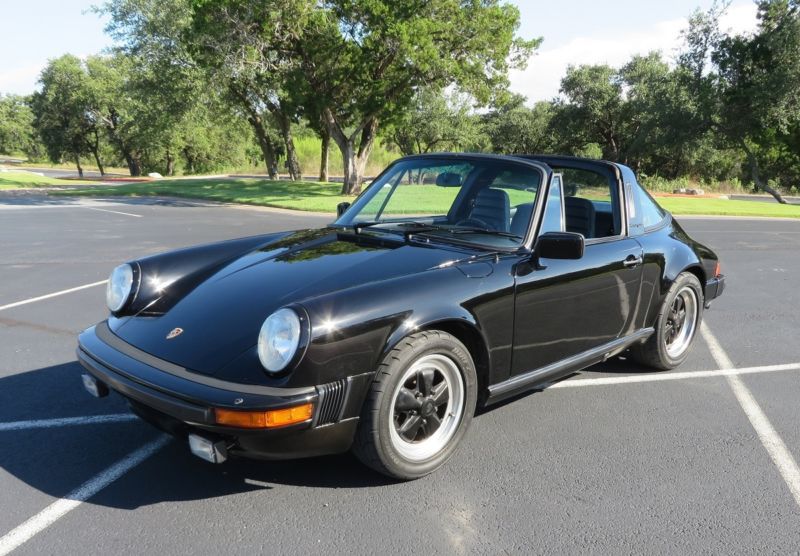 This beautiful 1981 Porsche 911SC is part of a 60+ car private collection in Austin, Texas.

I acquired this car from an enthusiast in the northeast who had purchased this car out of Florida as his "dream
car" but was forced to sell it because he was starting a business. The mileage of 61,381 is original and documented
by multiple Carfax and Autocheck records as well as the Massachusetts title dated 11/06/2009 and verifying 58,507
"actual miles". Under my ownership the car has been stored in a private facility in Austin, TX sharing space with
other collector cars from Porsche, Ferrari, Lotus and Aston Martin while being driven less than 200 miles in the
last three years.

When I bought this car, I was looking for a clean, mechanically sound driver to use as a base for a hotrod build.
Unfortunately (or maybe fortunately?) as air cooled 911's continue to climb in value I don't have the heart to
customize such an original car. I would not hesitate to drive this car across the country tomorrow. Along the way,
I'd make sure to stop by a few tracks just for fun. I hope whoever buys this car does exactly that because this car
deserves it. It's a great car that deserves to be driven.

Mechanicals:
The car starts, stops and drives exactly as you would expect from a car with this low mileage. It pulls hard and
revs smoothly and the 915 transmission shifts as it should with no grinding or other odd noises. The clutch is
strong and the car brakes easily and in a straight line. There are no oil leaks or smoking from the engine. The car
shows no signs of prior accident repair and is 100% rust free and as solid its low mileage suggests. Everything in
the car works as it should - lights, switches, wipers, gauges, everything. The car is numbers-matching.

When I received the car I was unhappy with the shifting of the 915 transmission. Accordingly, I took the car to the
Porsche specialists at TPWS in Austin, TX and spent $5,796.19 having the transmission rebuilt and a new clutch,
flywheel and ring gear installed. The result is a car that shifts and drives like the day it came from the factory.
The car has been driven less than 200 miles since this work was completed and service records of the work performed
are included with the car.

I haven't charged the AC system and it's currently not functioning although it was blowing cold when the car came
to me from the previous owner. All components of the system are intact and I have no reason to believe it wouldn't
function as intended after a service and charge.

While I have only driven this car less than 200 miles since I acquired it, I can honestly say that this car is
among the best-driving vintage 911's I've ever owned. Every time I take it out it exceeds my expectations. It will
yours as well.

Exterior:
From every angle, the car presents beautifully in its original factory black color. The car was previously painted
and the high-quality, professional respray is glossy and beautiful without dents or door dings. If you've ever
heard good cars described as "10-footers", then this car is a 5-footer with a ton of eye-appeal, outstanding
details, and excellent gaps. The paint, while no longer brand new, is still very nice with only light patina
including the usual handful of rock chips on the hood and nose of the car. The original finish was preserved in the
trunk, engine compartment and door jams and the factory VIN sticker and assorted decals are all intact. I'm finicky
about my cars and I'd rate the paint on this car an 8 out of 10. If you're looking for a great car that you can
drive every day without worry, and that will look great while you're doing it, this car is for you.