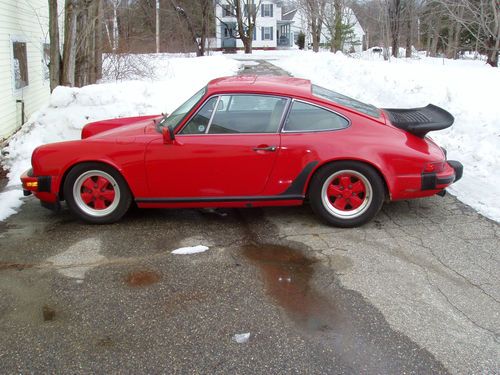 This is a 1980 Porsche 911SC project car.  It does NOT run and has been in storage since 2006.  I purchased it with the intention of getting it back on the road but too many other projects and too little time does not allow me to do so.  The seller told me that it had some sort of internal engine problem but did not know what it was.  I hooked up a battery to it and cranked it over but it would not start.  The engine turns over freely.  The chassis number is 91A0141642 and the engine number is 6401667.  The engine is a 1980 USA spec engine.  I believe it is the original engine.  The odometer reads 127,062 miles and I believe it to be original.  The car is equipped as follows: 5 speed manual transmission, electric sun roof, power windows, right side mirror, air conditioning, factory fog lights, factory front spoiler lip, rear whale tail, leather sport seats, leather dash board, halogen headlights, and an upgraded XM Radio ready sound system.  The car is complete.  The paint and interior are fair.  The factory Fuchs alloys are in good condition.  The exhaust system including the heater boxes appear to be in very good condition.  The car is being sold as is, as shown.  There is no warranty or guaranty of any manner shape or form.  What you see is what you get.  I have a clear clean title in hand.  The buyer is responsible for shipping and/or pick up.  A $500.00 non-refundable deposit is due via PayPal within 48 hours of the close of the auction.  The balance is due within seven days of the close of the auction.  Due to the proliferation of forged bank checks, the balance must be made either by cash in person or bank transfer.  I can store the car inside for up to 30 days as long as the above payment schedule is met.  You are welcome to come and inspect the car here in Berwick, Maine.  I am located 70 miles north of Boston, 50 miles south of Portland, Maine, and 35 miles east of Manchester, NH.  Thank you.