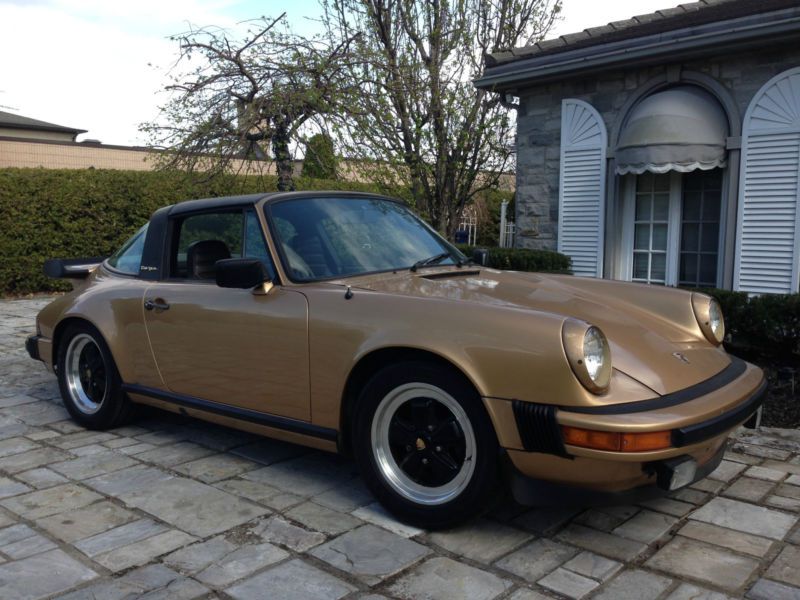 I am always available by mail at: gwendaschiavi@net-c.nl .

I introduce this vehicle as an original issue free excellent example of a Porsche 911 SC (Super Carrera). These air
cooled Porsches are climbing in value and are sought by discerning collectors.
The car is in excellent condition with perfect blemish-free paint-no scratches, dings, stone chips or excuses. The
body is as straight as a pin and has not been modified. The color does look much better than in the pictures. It is
rich looking hue of a blend of gold and bronze.
Most important is that there is NO RUST whatsoever and no part of the car shows any suspicion of rust and this
includes the body joints, floor pans, underneath and under moldings. The car was garaged and only used on rain free
days during summer months. This accounts for the low mileage.
All glass and trim is perfect-no scratches or wear. The electric window run well.
The targa top is fine and does not leak.
The interior and leather seats are very well preserved without scratches, tears or marks.(except for 2 inches of
wear on the driver side seat bolster) The dash, door panels and rear deck are excellent. There are no cracks or sun
damage.
The wheels are original factory Fuchs. They are in excellent condition without scratches or scrapes. The
chrome/silver part of each wheel is excellent.
The car has a new set of Yokahama tires as well as a new Porsche factory battery.
The engine has received a complete tune up, plugs, valve adjustments etc. It runs very very smoothly without any
hint of unwanted noises or valve clatter. There are absolutely no issues to this well maintained clean engine.
The transmission is the stock 5 speed manual in perfect condition. It shifts well and smoothly with no hesitation
or crunch when put into its gears. There is no hesitation when engaging first gear.
In conclusion, this is a superior example of what a Porsche SC is all about. The 3.0L engine is described as the
most reliable of the air cooled engines. This example does all that it was designed for-it runs straight, handles
like a Porsche and brakes perfectly. There is nothing to be done to improve it, except for the minor scuff on the
bolster of the driver’s seat.
The reason for the sale is that I purchased a 1967 911 which I must completely restore to the original condition of
the 1967 911 that I owned in 1969.