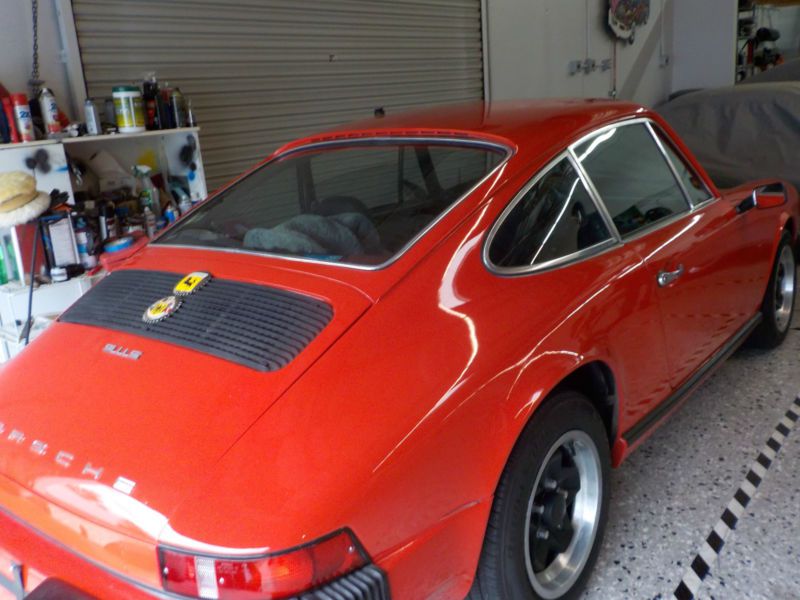 Bought this car for the restoration completed and then for sale.
Was going to use it for rally racing. Comes with original alloy cookie cutter rims and tires. Also, comes with 928
Porsche black rims.
Body Paint: *******Includes Certificate of Authenticity****Matching#'s Car runs well with occasional drop of
oil.2016 All valve cover gaskets replaced and purchased by Einmalig in Hunt Beach CA. I have $8500 in parts,engine
and labor receipts for the car. I am buried and cloaked with money spent on this car for the new owner to preserve
its originality and believed to be original miles based on its condition.
Body/Paint: Peru red, buffed, and repainted 3 years ago. 3 coats of medallion clear were used. Very wet look. Paint
is an 8 out of 10. All door hinges are clean with no rust. All rubber trims has been replaced. Felt for the
sunroof was replaced. NO dents, dings or otherwise on this car.Emblems are correct. A very small patch of bubbles
appears on the hood. I will upload a picture and the remainder of the paint is excellent with no signs of bubbles
or nicks.
Interior:Clean white headliner with NO signs of rips or tears. Dash is impeccable with no dry marks or dings.No
cracks whatsoever. New OEM rug trim from Porsche North American, through Einmalig. Back seats are good with new
carpeting all around. Seats should be sewed again.
Engine: I have 25 pages of PDF receipts. Leave your email and I will send you every receipt in advance. So much
done. Lets start here:The previous owner drove the car rough. I wanted the engine as close to perfect as possible.
There was no shortage of expense, but the labor added up quickly.
*New OEM front brake calipers-$500 purchased from Einmalig in Hunt Beach CA
*New rugs, carpeting, NGK spark plugs,
*$605 spent with Fat Performance on rebuilding 100% the webber carburators on the car.
Fat Performance is in Orange CA. Fully replaced every spring and pin and carb floats were totally cleaned to
perfection. The car runs like a sewing machine.
*Crankshaft-polished and measured and honed to perfection by Marine Crank in Santa Ana. CA. Connecting rods all new
and purchased by Einmalig In Hunt Beach. Measured perfectly.
*Engine casing, pistons new and polished by Costa Mesa Machine Shop in Costa Mesa CA.
New shims, belts, oil lines, fuel pump, fuel pump lines, alternator, starter, MSD box, MSD coil, all wiring was
new, Kenwood speakers, CD and radio
Purchased new bolts, springs from Steve personally from Steve's Porsche in Anaheim, CA.
New front smile, new sealed beams, light switches, felt for the sunroof, Timing chains replaced in 2015 by
Einmalig, oil lines replaced.Oil replaced in 2015, new filer, Mobil 1
New fuel tank. Barn find and sitting., New brake shoes, and every hose was replaced.
Much, much more. (Come and see the car) Email for current engine video.
Tires: Have 90% wear. Originally alloy rims are on the car. Including another pic of the car in 928 rims and new
tires. You will get the rally rims.
*****THE CAR HAS BEEN TAKEN CARE OF LIKE A CHILD. KEPT IN HEAT CONTROLLED HOBBY SHOP/SHOP IN LAKE FOREST, SOUTHERN
CALIFORNIA, ******PIC INCLUDED
Disclaimer: The car does not leave my shop for any pre inspection or until it's paid in full under any
circumstances whatsoever. I have a lift, jack and you can bring your mechanic to my shop or send someone there to
meet me and inspect the car inside and out on the lift. I am not insuring this car and do not need any
transportation company issues. I run a law firm and can not show the car during the day.
*********If you make a deposit and then do not follow through, you forfeit your deposit that will not be returned
as I have other private offers. Please be a businessman and follow through or don't make a viable offer.

Porsche ready to pick itself up after Le Mans failure

It's safe to say that things for Porsche didn't go quite as well at Le Mans this year as it might have hoped. After a sixteen-year gap, the winningest manufacturer in endurance racing history returned to the Circuit de la Sarthe this year hoping maybe not for outright victory in its first time back, but definitely a strong finish on which it could build on for next year. All the while it undoubtedly hoped its 911s would hold their own in the GT classes.
Unfortunately for Porsche, neither happened. After racing around the clock, and despite actually leading the festivities for some time, the best its 919 Hybrid could manage was an eleventh-place finish, lagging lamentably behind not only the other LMP1s (like the race-winning Audi) but also a handful of LMP2s. Meanwhile the LMGTE Pro and LMGTE Am titles went to the factory-backed teams of its arch-rivals Ferrari and Aston Martin, respectively.
Not a stellar result, in other words, but Porsche is taking it all in stride - accepting that it has a ways to go while congratulating its vanquishing rivals in the video below. It's good sportsmanship if we've ever seen it. Next year's race starts now.