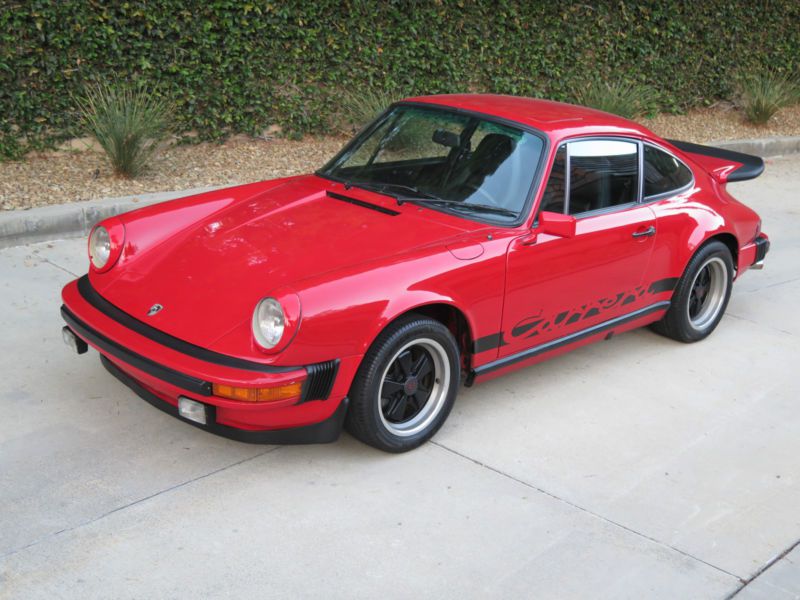 For more pictures email at: domenicdllumpkin@seeksfriend.com .

I am downsizing my collection of Porsches.
A 1975 Porsche Carrera Coupe that sold for $ 109.000-
My asking price is $ 69.911- !!!!
The history and development of the Porsche Carrera RS is very well documented,
and needs no further explanation as to the evolution of the early G series, US Carrera Model.
This 1975 Carrera Coupe follows in the wake of it’s illustrious predecessor, the 1973 Carrera RS.
This is an original un-molested car, right down to it's original US specification ride height!
The Certificate of Authenticity on hand for this car, shows this to be # 151 of the 395 made for the US market.
The Guards (India) Red/G8 and Black Leatherette/16 colour combination suit this Porsche perfectly,
and is complemented by the fabulous Factory Recaro Sport Seats, Electric Sunroof and Power Windows.
This car stands out as it has the very rare options of the full RS front oil cooler and front RS/Carrera Turbo
alloy brake calipers.
The rear whale tail spoiler, unique to this model, is also found on the early Carrera Turbos.
With 97k original miles, it was time to have it refreshed sympathetically.
The car had a full windows out repaint in it’s original Guards Red colour.
The car was delivered to it's original owner, in Arizona, before I brought it into California, so the car is dry
and rust free,
and no rust repairs were needed.
I had the seats re-upholstered, and new carpets installed by my Concourse Award Winning upholsterer.
The original Factory dash is in remarkably fine uncracked original condition.
Mechanically the car is well dialed in, and performs flawlessly.
The original engine, known to be volatile by nature, was replaced early in the car’s life with a blank cased 7R
Factory Replacement engine of the correct year and type.
Upon inspection this engine has been overhauled with inserts, and includes the updated Carrera hydraulic
tensioners.
At the same time, the problem causing thermal reactors were removed and a new sports exhaust system installed.
No smog is required for CA.
The private plate does not accompany the car.
This Porsche offered and described here is an honest example of a really nice and well sorted 1975 US Carrera.
It is ready to be used and enjoyed, as is, without further expense.
A delight to drive, all the controls work perfectly, clutch is smooth and gentle, the engine strong and powerful.
This car is eminently suitable and is eligible to enter many of the Classic Rallys and Tours that are currently
available, and gaining in popularity.
I consider this to be a wonderful driver quality Porsche, and it is capable of winning it’s class at any
Regional Porsche Club of America Concourse.
The car is titled, licensed and registered in my name, and comes with fresh registration for a year, and is insured
with Hagerty.