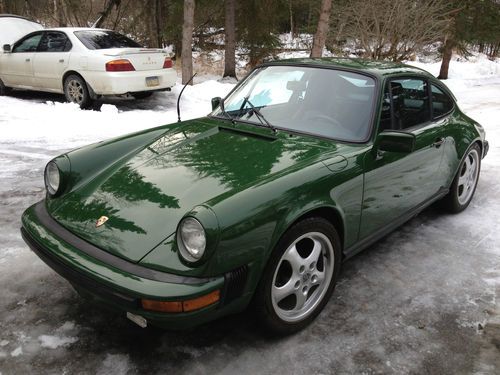 1974 Porsche 911 sunroof coupe, 116,474 miles, Irish green exterior color, black interior color, Nice original example with absolutly no pan or body rust. Porsche has the original 2.7 liter flat 6 motor and manual transmission. Paint is in excellent condition, no dents whatsoever and only really minor scratches. Carpet shows some wear but is complete and servicable. Dash and all other interior parts are in good shape. Brakes and clutch are in good condition. Very low miles as the car has not been driven much in last 15 years. Engine runs very well - starts easily and runs down the road with power to spare, does not smoke, but leaks a small bit of oil. Car runs and drives very well, very new tires that have less than 2k miles on them, the wheels are Porsche Cup wheels. Aftermarket radio/cd player, antenna. You are welcome to call 907 441 4857 with questions. The Porsche is available for inspection at local auto shops if desired and serious.