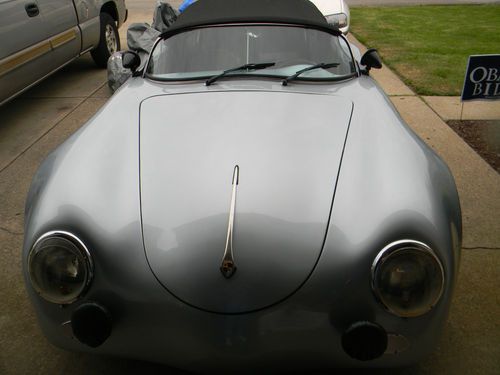 PORSCHE 356 SPEEDSTER REPLICA MANUFACTURED IN CALIFORNIA BY VINTAGE SPEEDSTER.THE MOTOR IS A 1915CC VW ENGINE WITH MOFO-HEADS,DUAL WEBER CARBURATOR AND CHROMED MOTOR,HEADER SYSTEM,HAS A SUPERTRAPED EXHAUST AND MUFFLER SYSTEM.THE CAR HAS A GRANT WOODEN STEERING WHEEL,AM FM SONY CD PLAYER,HAS A TONEAU COVER.THE CAR HAS RACEING SEATS THAT ARE NOT VERY COMFORTABLE AND ALSO HAVE THE RACEING SHOULDER HARNESS SEAT BELTS.THIS CAR IS TITLED AS A 1974 VW AND WAS TAKEN APART AND THE FRAME WAS CUT AND REINFORCED TO FIT THE PORSCHE BODY AND DONE BY PROS AT THE CALIFORNIA SPEEDSTER SHOP,I HAVE THE MANUEL THAT SHOWS ILLISTRADED PICTURES OF HOW IT WAS DONE.I THINK TO MAKE THIS CAR RIGHT YOU WOULD NEED TO REDO THE INTERIOR WITH THE CORRECT SEATS,AND A PERSON CAN PURCHASED ALL THIS STUFF FROM CALIF. SPEEDSTER.THE PAINT IS NICE WITH ONLY SOME PIT MARKS ON THE LOWER PART FROM ROCKS ON THE ROAD.THIS IS A VERY NICE CAR THAT RUNS BEAUTIFUL AND HANDLES GREAT.THE BUYER WILL TO PICK THIS CAR UP,NO SHIPPING ON MY PART. ANY QUESTIONS CALL ME AT 740-534-2546.JIM