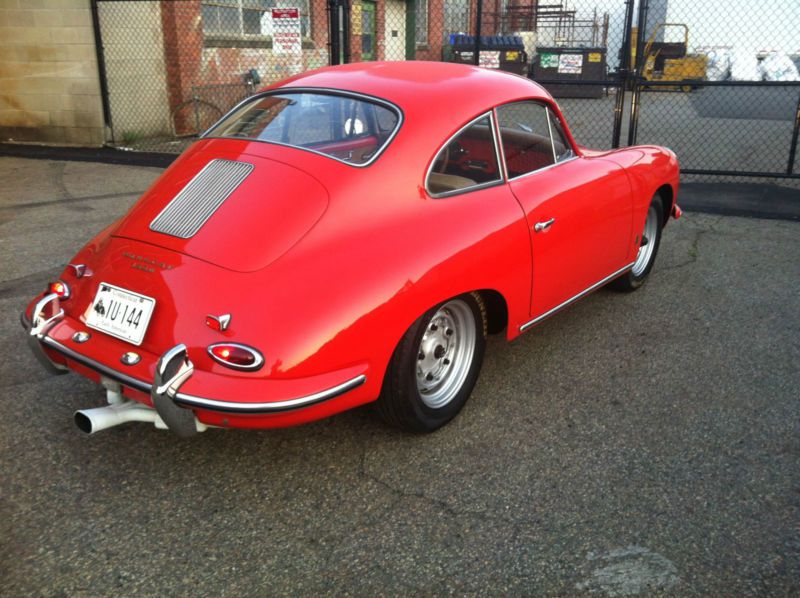 More infos regarding my cat at: crystalckkracke@ukpub.net . Matching-numbers 1961 Porsche 356 coupe in great running condition. This is a well-sorted, turn-key car. I've given
it a mild "outlaw" look but all the correct, original parts are included in the sale if the buyer would like to put
back to a "stock" appearance.
This car contains almost all of it's original components including the original spare tire and rim (as noted on the
car's Certificate of Authenticity it is a Firestone Phoenix tire that appears to be unused). The car was originally
Fjord Green and was repainted red/orange prior to my purchase - the paint presents very well.
I am a long time Porsche 356 enthusiast and went through this car thoroughly.
All body panels including trunk lid, doors and engine lid are original and numbers-stamped with last 3 digits of
VIN (848).
Almost all date-stamped components are also correct and date-matching including the gas tank, original spare rim,
Bosch coil, VDO gas gauge float, starter, and voltage regulator (generator is dated 1963).
The engine compartment retains it's unique (1961) and correct firewall insulation.
The engine was rebuilt prior to my purchase, and runs excellently. Upgrades I discovered were big bore pistons and
cylinders and an aluminum oil cooler. A compression test showed good compression between 120-135.
Major recent work includes rust repair using correct metal replacement panels to the battery box floor (the tow
hook was replaced at this time), rear doglegs and closing panels behind rear longitudinal on driver's side. The
underside has also been coated with Wurth product.
I've also installed a beautiful Sebring style exhaust made by Karmann Konnection in the UK. The unit was
bead-blasted and coated in off-white prior to installation and has less that 200 miles on it since installed.
I also had much more work done and many more items restored or replaced (too many to list but I have all receipts
and will include in sale), including:
Gas tank was removed, sealed with Red Kote and repainted with 2 stage epoxy (original style felt strips
underneath tank and under straps)
Original fuel petcock rebuilt
Trunk compartment detailed/painted, new rubber mat, tire strap bracket, tank hoses and ground strap
Generator rebuilt/voltage regulator tested and calibrated
Starter rebuilt
Distributor rebuilt and detailed
Horns rebuilt and refinished
New Boge steering damper
New Dunlop tires (with period-style stencils) and 4 wheel alignment
New battery/NOS battery cover
Engine components refinished correctly/with correct decals
New bulbs throughout; headlights, interior dome lights, turn signals, license plate lights
Rear vinyl interior panel restored
Period "Moto Lita" steering wheel with vintage Porsche crest horn button
Original components included in the sale are; original steering wheel, rear bumperettes with funnels and horn
grills. All in very good to excellent condition.