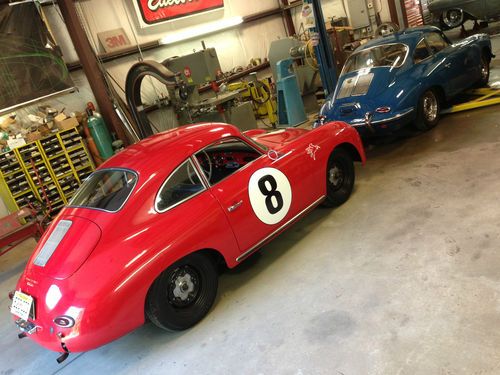 Condition: UsedA vehicle is considered used if it has been registered and issued a title. Used vehicles have had at least one previous owner. The condition of the exterior, interior and engine can vary depending on the vehicle's history. See the seller's listing for full details and description of any imperfections.Seller Notes:"excellent driver, great shape"

beautiful 1957 356 A coupe. This is a california black plate carthat has been in CA until this year. It seems it was purchased in CA in 1957, then resold in the 70's to a person who had the color professionally changed from silver to Porsche red and the engine upgraded to a 1963 Super 90 engine and kept it until this year. The paint was done well and has the perfect amount of patina for this cars over all look. The steering wheel, shift knob chrome etc. has that perfectly aged look that lets you know that this was always a very well kept car. In my opinion, for a driver car, this kind of character makes the car cooler than one that is perfectly restored. It's for the owner that uses his cars and is not afraid to park it in the center of town or along the beach boardwalk.

The interior is new including professionally reupholstered correct seats, the speedometer and tach do not work. The car is very tight and drives very well, I drive it almost daily and it flies down the highway very well. I dont know if the engine has been rebuilt ever, but its very clean top and bottom and runs great.  The tires are new, the paint shows very well. All lights work, the doors close perfectly. the doors line up well, windows go up and down as they should. It could use new windshield and backlite rubber. all sheet metal is matching number.

The car gets looks everywhere and is a blast to drive. Its not the kind of car that should be left in a garage without being used, its perfect for the guy or girl that is not afraid to use it! email for more info or if you want to come and see it.