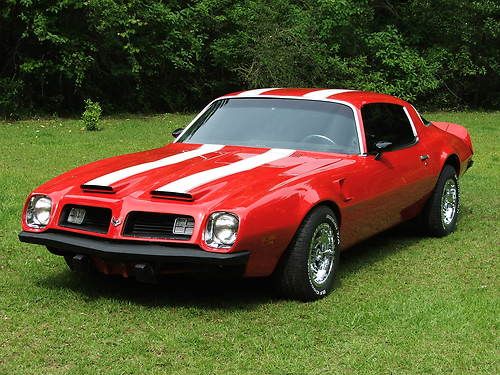 Pictures are worth 1000 words...  Not a award winning show car, but is a head turning, thumbs up cruiser for the local cruis'in, or your daily driver. This is a true Trans Am, not a formula, with a straight, bondo free, solid florida car.The engine has a 1968 block known that year for horsepower. Not like 1975 when all vehichles horsepower was regulated. Tach has also been converted with the 160mph one, not the 85mph original. Engine is dressed with elderbrock goodies, mallory distributor with MSD ignition and wires. Fuel pressure gauge. APC racing seats with harnesses. Carpet looks great, seats look new. Paint is in o.k. condition, has a couple of cracks and bubbles. Needs a front valace, wich can be found on e-bay for $369. Glass is all solid, and seals are new like with no dry rot or cracks. I have a great price on this car, due to an injury. This is the only reason why I'm selling. My PAIN your GAIN. Serious Bids Only Please.