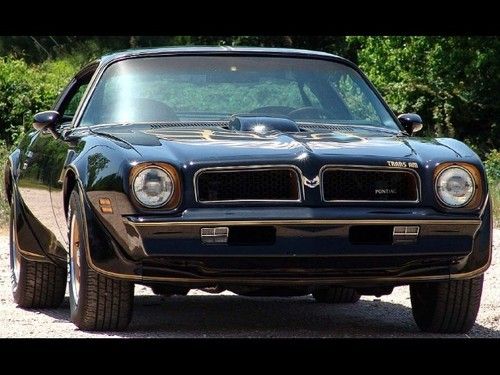 Condition: UsedA vehicle is considered used if it has been registered and issued a title. Used vehicles have had at least one previous owner. The condition of the exterior, interior and engine can vary depending on the vehicle's history. See the seller's listing for full details and description of any imperfections.Seller Notes:"WOW - This is One Rare BirdEngine was rebuilt 5 years ago - Had 128K miles after the rebuild, but motor is all re-done.- This car is PHS documented is all orginal* has all documentation and NUMBERS MATCHING1) The car is all original* – for a car that is 35+ years old - is amazing) The car has 128+K miles on it with all numbers matching drive train - Motor was rebuilt 5 years ago with all factory orginal GM parts.3) Car is 1 of about 316 ever made4) Has original paint – yes it could be repainted but it has been left original - No rust 5) Original window sticker and manuals6) PHS ( Pontiac Historical Society) documented7) Original AM/FM Radio with working 8 Track Player8) This car has the very rare Black-Chrome Split-Exhaust tips – Only the first few months of production had these."