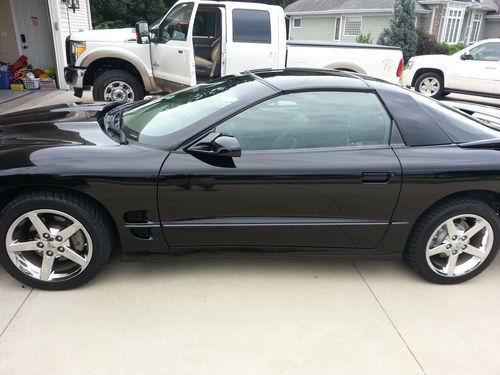 This is a beautiful WS6 Trans Am Show Car!! Very Fast and Sounds very mean. Smooth shifting, glossy paint, interior is near perfect. No Marks rips or tears. I bought this car from the guy who did all the modifications, and I dont know anywhere near as much as he does about car motors. He included a bunch of paperwork which I scanned most of, and you can see it below in the pictures. I know the crankcase, cams , heads, lifters, exhaust, suspension and oil pump are all from some racing company. This car fires up quick and will scare your friends. It seriously sounds almost like a Nascar. It pulls very hard through all the gears, and never seems to quit. It will beat Vipers, Corvettes, 911's, and new Camaros. No disappointments here, this is a true showcar in every way. 17" Chrome Corvette Wheels with zero curb rash. UNDER 3000 MILES ON REBUILT MOTOR!!!!  Please feel free to eail me with any questions. hazzardsalooncr@gmail.com