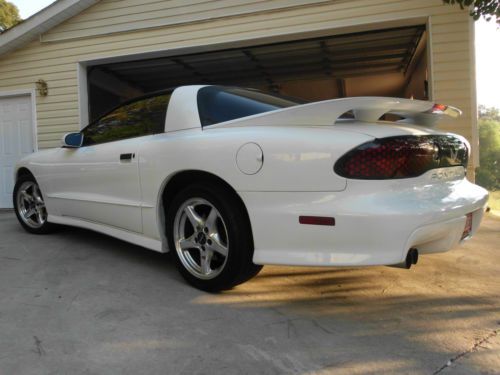 Condition: UsedA vehicle is considered used if it has been registered and issued a title. Used vehicles have had at least one previous owner. The condition of the exterior, interior and engine can vary depending on the vehicle's history. See the seller's listing for full details and description of any imperfections.Seller Notes:"GORGEOUS SOUTHERN CAR SINCE NEW!"

OFFERED FOR SALE IS A GORGEOUS AND SUPER RARE WS6 TRANS AM, THERE WERE ONLY 2827 OF THESE PRODUCED,THIS IS A TRUE SOUTHERN CAR SOLD NEW IN KNOXVILLE TN, THIS IS A AUTO CHECK PERFECT CAR, NO ACCIDENTS AND 3 OWNERS SINCE NEW. THE CAR RUNS AND DRIVES AMAZING, HAS A SPECIAL TUNED EXHAUST, OTHER THAN THAT ITS PRETTY MUCH ORIGINAL FROM THE FACTORY, THERE ARE A FEW ENGINE DRESS UP OPTIONS AS SEEN, THE CAR RUNS AND DRIVES FANTASTIC, TRANSMISSION SHIFTS PERFECT, NO REAR END NOISES OR ANYTHING THAT SHOULD NOT BE, THE A/C, AND ALL POWER OPTIONS WORK GREAT INCLUDING THE POWER WINDOWS. WE HAVE JUST HAD THE VECHICLE SERVICED, AND IS ALSO SITTING ON A SUPER NICE SET OF TIRES! THE INTERIOR IN THIS CAR IS AMAZING, THE LEATHER, CARPET, DASH, DOOR PANELS ARE LIKE NEW, AND ORIGINAL NOT REDONE IN VYNIL, BUT STILL SPORTS THE ORIGINAL LEATHER HYDES WHICH ARE SOFT AND NOT SUN BURNED AND DRYED OUT! HAS THE SPECIAL ORDERED RAM AIR WS6 PKG, WHICH MAKES THIS CAR RUN AND DRIVES AWESOME! THE CAR HAS BEEN REPAINTED BUT THEY DID A SUPER JOB, NO OVERSPRAY IN THE DOOR JAMBS OR A POOR QUAILTY JOB, IT LOOKS GREAT! ALL THE DOOR SEALS AND WINDOW SEALS ARE LIKE NEW , NOT DRY ROTTED, THEY ARE SOFT AND PLIABLE. I BELIEVE THIS CAR HAS BEEN WELL PRESERVED AND NOT MIS TREATED WHAT SO EVER! THE CHROME PLATING ON THE ORIGINAL WHEELS IS ABOUT THE ONLY THING I CAN FAULT, THERE IS SOME MINOR PEELING BUT OTHER THAN THAT SHE"S A BEAUTY!  THIS CAR ALSO HAS A SUPER SOUND SYSTEM WITH SUBWOOFERS, TAKE OUT THE TOPS AND GO!!!!  I AM ADEALER IN GEORGIA, AND I TRY TO FIND SUPER NICE CARS THAT I FEEL MAKE THE GRADE FOR ME, IF THEY DO, I OFFER THEM FOR SALE, I DONT LIKE JUNK AND WILL NOT LET IT TAKE UP MY VALUABLE SPACE IN MY WAREHOUSE, LOOK AT MY FEEDBACK, THIS IS A CAR I WOULD SELL TO MY BEST FREIND HANDS DOWN, IF YOU ARE LOOKING FOR A NICE CAR THAT HAS BEEN WELL MAINTAINED AND IS COSMETICALLY GORGEOUS, HER SHE IS!! IF YOU ARE A GEORGIA RESIDENT SALES TAX WILL HAVE TO BE CHARGED, IF YOU ARE OUTSIDE GEORGIA THERE WILL BE NO OTHER FEES AT ALL (DOC FEES) NONE OF THAT B/S! THE WINNIG BID IS IT, I WILL ALSO OFFER YOU A 30 DAY DRIVE OUT TAG TO GET THE CAR TO YOUR DESTINATION, FEEL FREE TO CALL ME, JIM @423-260-5985 IF YOU HAVE ANY QUESTIONS, I DO HAVE THE AUTOCHECK WHICH IS FINE, NO REBUILT OR SALVAGE, THIS IS A TRUE CAR THAT YOU WILL ENJOY, GOOD LUCK.