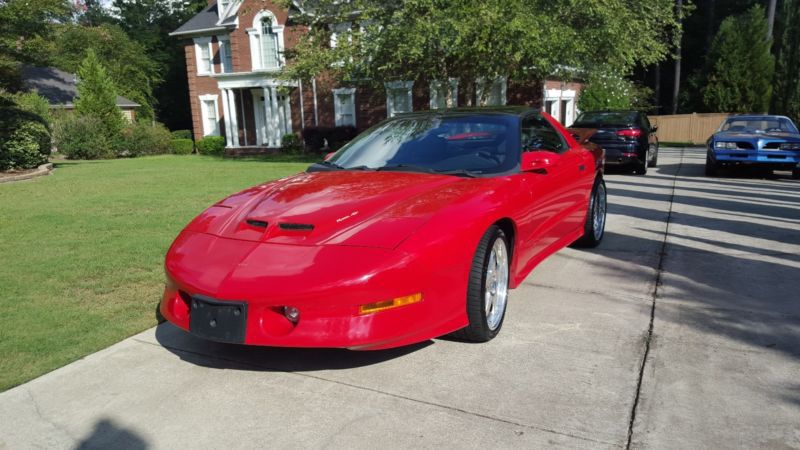 If you have any questions please email at: judejwwaldeck@poshtarts.com .

1997 Bright Red Pontiac Trans-Am 5.7 Liter Automatic WS-6 Performance Package
Drives Strong! Fun to drive!
Car was purchased in July 2013 previously owned by one owner. I purchased the car as a daily driver, then began
replacing parts. Power windows, power driver seat, power steering, rear defrost, good cold AC, cruise control.
All parts listed below have been installed since I purchased. Prices given below for performance upgrades are for
parts only (no labor). I have not used as a daily driver since Nov 2014. The car has never been raced or wrecked.
I am including the original rims (with brand new WS6 logo center caps) and BFG tires ($600/8000 mile wear) that I
used prior to upgrading to the current rims and tires. Current Pirelli tires have 4000 miles wear. I am also
including the two volume Factory Service Manual and Haynes Repair Manual I bought when I first got the car. I have
all dated receipts. I have three sets of keys and two functional fobs (one is original and the lettering is worn;
the other is in almost new condition). Only serious inquiries, please.
· New Engine Control Module ($263.00)
· Hypertech Programmer ($400) – to calibrate speedometer after larger wheels and rebuilt rear-end/3:73 gear
ratio)
· Distributor Caps- MSD brand (cap & rotor)
· MSD ignition wire sets performance
· Rebuilt rear-end 3:73 gear (ring and pinion changed to 3:73)
· Bilstein performance struts & shocks and Eibach performance springs, Front/Rear ($749.95)
· New upper strut mounts ($175.00)
· New OBT Red Battery 75-35 ($250.00)
· New OEM fuel filter
· New Evap system canister solenoids and hoses
· K&N cold air intake (already installed when I purchased)
· New OEM Alternator-replaced 2014
· New thermostat
· New A/C compressor
· New Water Pump
· New U-joint
· New Torque Arm, Auto Trans Mount, and Bushings ($42.00)
· Trans-Am Rear Valance with Fiberglass Diffusers ($325.00)
· Decals include (new—not installed on car):
o 30th Anniversary side style stripes in High Performance Black vinyl
o “Supercharged” customized windshield decal, “Trans Am” font, in Reflective White vinyl. Note: engine is
NOT supercharged…yet…!
o Large hood bird decals (48”x 34”) in High Performance Black vinyl —style matches tail light style
o Large Pontiac rear window decal in reflective black (changes at night)
o LT1 tail light grid paint stencils
· “BitViper” antenna (not installed yet). If you don’t know about these, do a web search…very cool.
· Custom Fitted “HEATSHIELD” Advanced Windshield Reflectors for the windshield, both side windows, and rear
window. The rear window shield needs to have black Velcro fasteners installed (I have some that I will include);
this is because the suction cups will not adhere to the glass; the glass is steeply angled; also, one of the
suction cups on the rear shield is loose.
· Custom selector knob with correct style firebird logo (see picture)
I have included screen shots from the decal manufacturer’s website (AutoGraFics) for reference. Note that the
hood decal and rear window decals are no longer listed on the site. The tail light paint stencils are not
pictured.