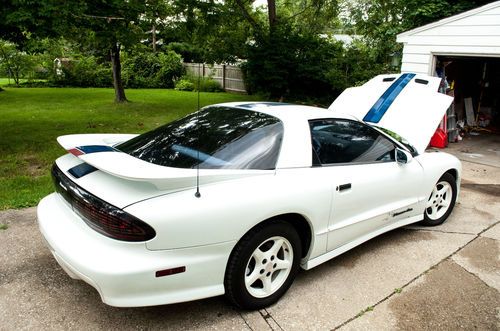 Condition: UsedA vehicle is considered used if it has been registered and issued a title. Used vehicles have had at least one previous owner. The condition of the exterior, interior and engine can vary depending on the vehicle's history. See the seller's listing for full details and description of any imperfections.Seller Notes:"This is the Trans Am you will love! This Trans Am was owned by the same gentlemen who bought it off the lot in 1994 in Texas. It spent all but its last 2 years in the south so it is rust free and in excellent shape. This car is a documented historical vehicle (through Pontiac historical services) that was number #748 of the anniversary editions to come off the line. The hard top was a very rare option with only 388 ever produced (only 254 came with cassette. Minor things needed to make it show worthy. Exterior is a solid 8.5 out of 10. There are a few typical small chips in the paint and the front could use a good buffing to eliminate road film. New headlight motors and passenger side window motor. Interior is a 9 out of 10. AM/FM button is wore down and brake pedal needs a new rubber boot. Engine runs strong and is in perfect condition and has new A/C. All maintenance was performed at dealerships. I Have a new hood stripe decal just not installed yet as the old one is faded some."

Here is a real head turner. This 25th Anniversary edition Trans Am was number #748 of only 2000 produced to commemorate the T/A's 25th year. The car was manufactured in St. Therese Quebec and was ordered by Mitchel Pontiac Toyota in San Angelo Texas. These cars were such a hot item that it was sold for $2000 over invoice. The original owner had this car for 19 years. It was always serviced by dealerships and spent most of its life in the south and has never seen snow. The car was driven and enjoyed but has never been in any kind of accident. There are some minor paint chips and some road film on the front of the car that a good buffing will take out. Graphics are in good shape but I do have a new roof panel decal but have not put it on yet. Outside is a very solid 8.5 out of 10 and is a perfect 4 foot car. The 25th anniversary logo on the center caps is the only thing that will need to be replaced on the exterior as they wore off over the years. The headlight motors are new and brakes have been done in the last 5k and tires are great.

The interior is a solid 9 out of 10. The back seat looks like it was never sat in and all the 25th anniversary logo embroidery is in perfect shape. The drivers side outside seat bolster had some wear on it and was recently repaired. (not replaced) and the stitching was not put back in so to make perfect the stitching could be sewn in. The AM/FM button paint is wore down and the brake pedal rubber boot needs replaced. Other than that, the interior looks like it did brand new.

The engine runs perfectly. The only thing not stock on it is the cold air intake. We just took it 2 hours and back to Pennsylvania and drove perfectly. The A/C unit is new within the last year along with the brakes.

Put a few hours into detailing and fixing the minor items and you will have a car ready to take to any show.