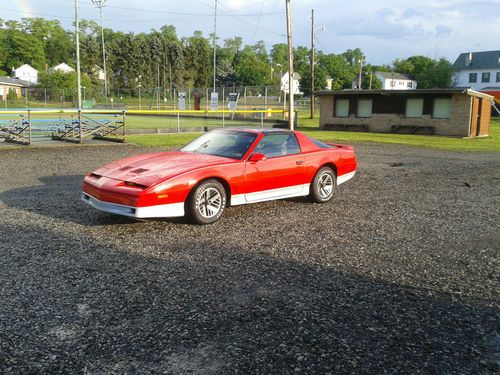 1986 PONTIAC TRANS AM T TOP CAR RUNS GREAT  .  WELL MAINTAINED 305 TUNE PORT INJECTION WITH 700R4 AUTOMATIC TRANSMISSION .  NEW INTIROR AND NEW PAINT LAST YEAR .  ALL NEW WEATHERSTRIPS AND GASKETS WHEN REPAINTED. I THINK I AM THE 4TH OWNER OF THE VEHICLE. THE ONLY REASON I AM SELLING IS BECAUSE I HAVE TO MANY OTHER PROJECTS . THE WINNING BIDDER IS RESPONSABLE FOR ALL SHIPPING AND TRANSPORTATION. PAYMENT DETAILS ARE AS FOLLOWS 1000.00 DOLLAR DEPOSIT TO PAY PAL WITHIN 48 HOURS OF END OF AUCTION . FULL PAYMENT AND PICK UP WITHIN 7 DAYS.