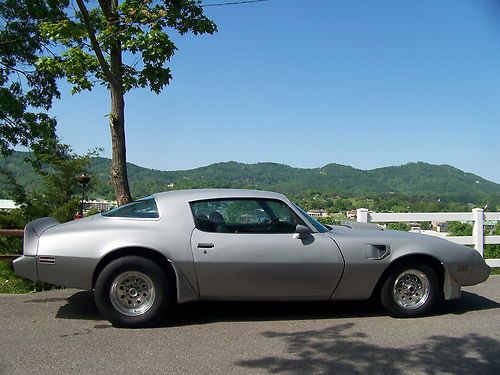 1980 PONTIAC TRANS AM HITTIN 400 CI. MOTOR AND BUILT AUTOMATIC TRANS WITH SHIFT KIT AND B&M QUICK SILVER SHIFTER IN CONSOLE .    THIS CAR HAS A GOOD SOUNDING AND RUNNING MOTOR WITH FLO-MASTER EXT.  CAR HAS PW WINDOWS AND PW DOOR LOCKS ALONG WITH THE ORGINAL INTERIOR AND TRANS AM STEERING WHEEL .  CAR ALSO HAS NICE WELD DRAG LITE WHEELS AND IS A GOOD DEPENDABLE DRIVER CAR THAT IS A LITTLE ON THE HOT ROD SIDE .  YOU ARE WELCOME TO COME VIEW THE CAR IN PERSON .  PLEASE ONLY BID ON CAR IF YOU HAVE THE FUNDS TO PAY FOR IT IN HAND AND YOU INTEND ON BUYING IT .  THANK YOU .  SERIOUS INQUIRIES ONLY .  AND I HOPE YOU ENJOY BIDDING ON THIS COOL CLASSIC 33 YEAR OLD TRANS AM THAT IS A BLAST TO DRIVE !!! KEEP IN MIND THEY ARE NOT MAKING CAR'S LIKE THIS ANYMORE !!!!  FEEL THAT PONTIAC POWER !!!!