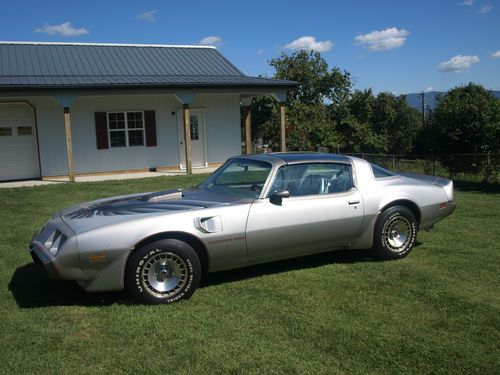 Condition: UsedA vehicle is considered used if it has been registered and issued a title. Used vehicles have had at least one previous owner. The condition of the exterior, interior and engine can vary depending on the vehicle's history. See the seller's listing for full details and description of any imperfections.Seller Notes:"Left front grill is broken"
1979 Pontiac Trans Am
10th Anniversary Limited Edition

This is a one owner low mileage, one owner excellent condition Pontiac Trans Am
with Automatic  transmission and 6.6 Liter V/8 Engine.
Automobile has been kept inside for the past 20 years. Hood does show some fading, and the left front grill is broken (see picture), interior for left front door does have a piece of chrome that is loose (see picture). Car has original tires but right front does have a tube in it.
Vehicle may be viewed at 103 West High St. in Stuarts Draft, VA. Please call 540-337-1438 to make an appointment to see this car.