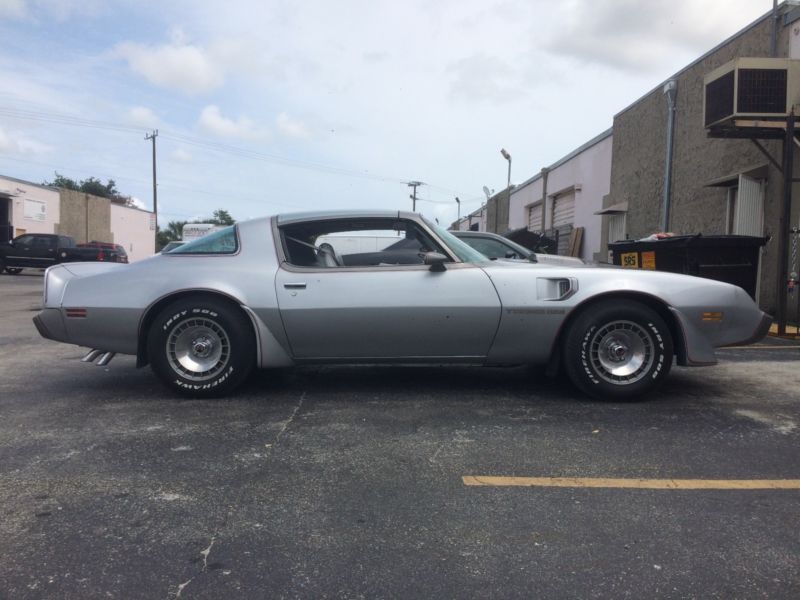 Please email me with any questions or requests for additional pics or something specific at: dorthamieczkowski@juno.com .

1979 Trans Am Silver Anniversary rare 4 speed example in amazing original condition with only 80k honest miles
since new. This car is not concourse, but was super well maintained throughout its life, and runs and drives great.
It is very hard to find an original in this condition, especially since they have recently shot up in value, and
show no signs of stopping. How many things in this life can you
honestly say that about? It comes with a build sheet as well as a PHS report. The seats are in great
condition,showing hardly any wear except for some marks where the seat belts have rubbed on. All carpets are in
great condition and have been protected by mats as shown in the photos. The interior is in excellent original
condition and shows well with no fading. The headliner and the mirror finish t-tops are still in beautiful
condition All the rubbers are in good condition with hardly any age related issues. The exhaust is new and the
undercarriage shows extremely well. The paint on the car shows no fading and presents well. All the screaming eagle
transfers as well as other decals and stripes are almost perfect. All the panels line up great and there is
absolutely no evidence of previous accidents and repairs as far as I can determine. The dash and instruments are as
new with no discoloration or fading. The machined Aluminum is as new. There are some minor time related surface
rust spots on the undercarriage. The engine bay is in amazing original condition and shows well as does the
underneath of the hood. The motor pulls strong and the transmission and suspension function as they should. The
Turbine wheels are also in amazing condition.