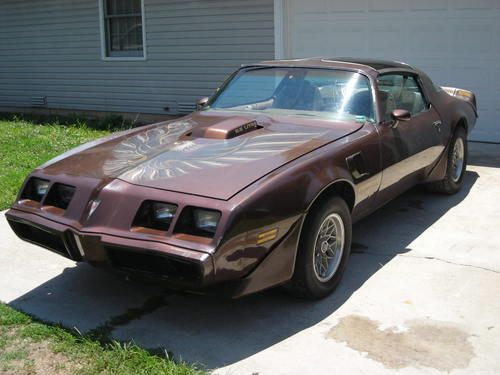 1979  Pontiac Firebird Trans Am, 403 V8, Automatic, WS6, 4 wheel Disc Brakes, T-Tops, 8 inch Snowflakes, PS, AIR, (NOT HOOKED UP), Tilt column (tight), Cruise, after market gauges, Holley carb, Dual exhausts with turbo mufflers, Posi-Trac, previous owner said engine and transmission has been rebuilt, runs and sounds good, does not smoke, shifts out nice. Has rust in front and behind quarters but not around wheel openings. Floors are solid, trunk pan has rust but not around wheel wells. Deck lid has some rust. All parts are there, car has lots of power and drives nice. Still needs front tires, some TLC before road worthy.