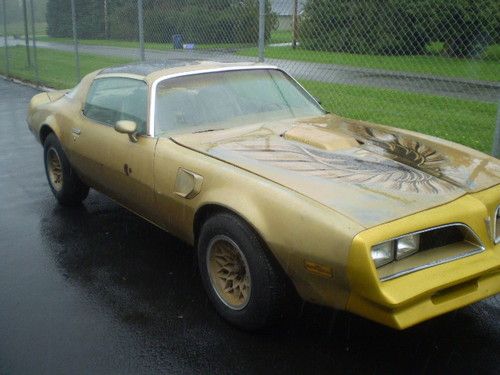 Very hard to find NUMBERS Matching Gold Edition, Y88 trans am with 62,900 miles showing on the odometer. Complete Service records until 1994 when it was taken off the road and placed into storage. This car has the PHS documents showing to to be a genuine Y88 car with the W72 performance option. It IS NOT a WS6 car however. It has a clean title free of accidents or liens. It spent its entire life in Eastern Washington State and Montana. It has never been painted or restored so there are no hidden surprises. With the exception of the passenger's side floor pan, the floors are solid. It will need new lower rear quarters and some attention to the lower front fenders. We removed a front fender to show you the condition of the car in that area, as you can see its very clean. The engine wears its correct W72 valve covers however the carberator shows as a 1971 455 model. The car runs and drives although it has not been on the raod for almost 20 years. The glass is in fantastic condition. The trunk has no rust and still maintains its original finish. I have many of the service records, original manuals and the complete PHS package that go with this car.

This car is being sold as is, where is. I can assist with shipping. THIS IS A NO RESERVE AUCTION....highest bidder takes it.
Ask all questions PRIOR to bidding. I check my account a few times a day so I will respond quickly.
Car is for sale locally so I reserve the right to end the auction early.
REMEMBER, THIS IS A NUMBERS MATCHING Y88/W72 THAT HAS NEVER BEEN RESTORED. IT HAS NEVER BEEN WRECKED AND HAS A CLEAN TITLE.