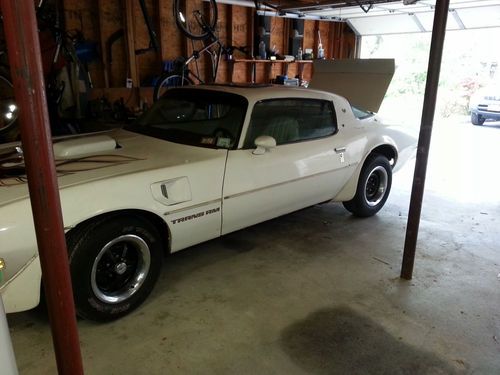 Up for auction * 1978 Pontiac Trans Am Firebird.White with white interior , auto trans , power windows, all spoilers are there , and shaker scoop , body is in pretty good condition for the age ,the previous owner had owned the car since 1988 and its been sitting in storage for the last 21 years. you can tell by looking at the stickers the car was last inspected 1992 and registered 1993.needs a restoration.21 plus years ago the original 403 cu olds went, so a Pontiac 350 used engine was put in ,  But that engine was a oil burner so at that time he was disgusted and put the car in storage and figured when his son got older they would do a father / son restoration. It did not happen.The engine has not run in a while, does not run now , old fuel will have to be drained from tank as well, back in the late 1980's to early 90's he had someone do some body work, it's looking alittle shabby on the drivers side rear quarter. The pictures should reflect that. The negatives are = incorrect engine needing a overhaul,some frame rot on drivers rail,no radio or rear speakers , and the sunroof and some body work which all these can be corrected. The good is it's a real Pontiac Trans am.I will answer any questions I can about this car. I want there to be no surprises. Please if you are not sure do not place a bid.( Also available, but (NOT) part of this auction is the drive train from a 1978. Trans am gold edition 400 engine, 4speed tranny which was rebuilt with shifter and linkage, hanging pedal assembly, posi disc brake rear. All of that will be available for $1000. To the winning bidder, The engine was out of a running car ).These Trans Ams are getting hard to find now , and are going up in value , LOW RESERVE ON THIS ONE , GREAT STARTING POINT  , GOOD LUCK BIDDING .I have many other pics, E-mail with and I can send , Thanks Gary