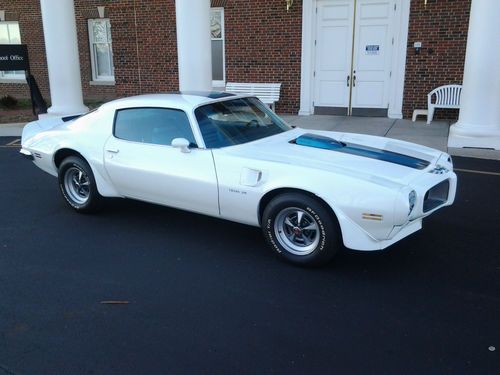 1970 trans am, PHS documented, numbers matching, 70253 original miles frame off restoration in 1991, since restoration vehicle has been well maintained and taken good care of.  The car has always been garaged, the car is rust free and the under carriage is very impressive. It has rust free floors and trunk floor. I purchased the car from Scotts Dale Arizona where it has been for most of it's life. The car is very original and correct even down to the correct jw stamped wheels.  I have tons of documentation and past ownership information.  The car runs and drive perfect, it is a blast to drive.  I have never owned a car that drew so much attention.  AC components in tact, but missing the drive belt.  I have not checked into repairing it.  There are a few minor imperfections, one in the nose, paint cracking, and one small crack in driver quarter.  Will need ac blower motor also.  Overall, the car is in amazing condition for the year and completely original.  1 of 1339 built with automatic transmissions. Only 3196 total produced in 1970.  I hate the thought of selling it but I haven't much time for the vehicle.  If you have any questions I can be reached at 636-575-1100.  Please call between 6 and 9pm central or any time on weekends.