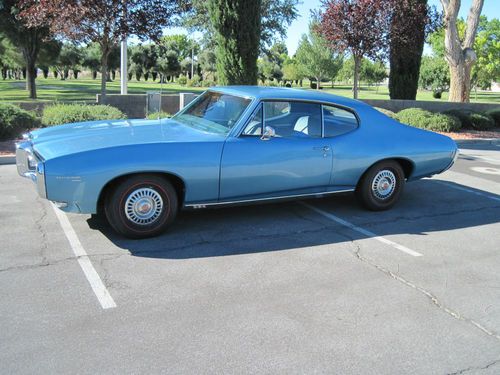 What we have here is an extremely RARE 1968 Pontiac Tempest Custom with a factory 350 HO Motor and manual trans. This is a good running and driving car. The drive train is complete #'s matching down to the partial VIN stamped in the block. I beleive the motor has never been out of this car. This is the 350 HO motor only made in 68 & 69. Its 320 HP @5100 @ 380 Torque @ 3200. It has the factory 4 barrel Quadrajet carb. The trans is the factory 3 speed floor shift Toploader. The rear is also original and is a 3.36 open. This car is RUST FREE! Its never had any rust. The car came with the following options:

350 HO engine
floor shift 3 speed HD
recessed wipers
viser vanity mirrors
drivers door outside remote mirror
custom seat belts with shoulder harnesses
deluxe wheel discs
deluxe steering wheel
power steering
power brakes
tinted windshield
custom pedal trim
8.25X14 WW tires
213 blue interior
floor carpet
roof moldings
dual horn assembly
decor group
dual exhaust
This is completely documented in the PHS paperwork and the original build sheet i have. I also have the New Vehicle Warranty Card and the original dealer check sheet which has the block code written on it. This was built in the Fremont, CA plant on 1-22-68. It was sold at Carleson Pontiac in Salt Lake City, Utah on 2-9-68. The numbers on this all match. They are as follows:
intake 9790140
cylinder heads # 18
block 9790079
block VIN 28Z117216
block code 376190 WR
trans C8AR 7006 tag: Rat E1 029987
radiator tag BE XJ The XJ is also cast in the tank
rear 9792977 date L217 This is an 8.5 rear with 3.36 gears
bellhousing 9785581
This car is road ready. Drive it home. It has been repainted. The paint looks good but is not perfect. It has some imperfections and chips here and there but overall looks good. I would rate in a 8.5 on a 1-10 scale. The weatherstrip and window fuzies are new. The rear bumper is new. The front bumper is slightly bent so it doesn't line up with the hood very good. The tires are NEW Coker Redlines with less than 50 miles on them. The 2 rear rocker moldings are missing but are available reproduction. One of the rear taillight lenses and the 2 front turn signal lenses are broken but still work. The motor runs strong. The trans shifts smoothly. The brakes work good. All the lights, turn signals, horn, wipers ect work. The body is very straight. All the glass is good. The steering is tight and the car drives nice. The interior is original and unrestored. It needs to be redone. It works but the seat covers, carpet and headliner need replaced. The door panels look very good. This is sold with no warranty expressed or implied. Buyer will be responsible for shipping. Delivery by me is an option. I have a clear Nevada title to this in my name. Payment must be made within 3 days of auction close or i will assume you were not a serious bidder and relist it. Please have the money before bidding! This is a very rare car and one of the few remaining originals. Its not perfect but looks good. I am uploading 24 pictures and a youtube video of the car. Please e-mail or call me with questions at 702-624-3266. My name is Mike. I am on Pacific time so please don't call in the middle of the night. Happy Bidding!!!
Heres the youtube video link:   http://youtu.be/maY1JfHtANI