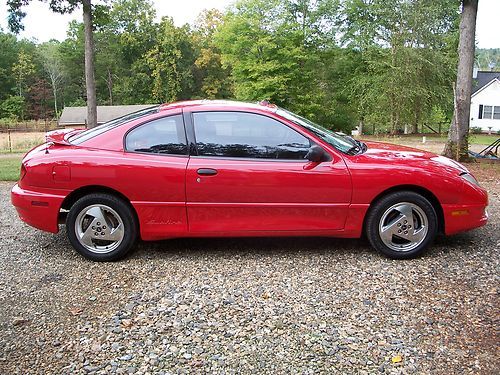 This is my daughters 2004 Pontiac Sunfire SE Coupe. We bought it 3 years ago and she drove it to school her junior and senior years. She recently developed some health problems and is not able to drive anymore. I don't need the car and hate to see it sit and degrade from not being used.

It is a very nice , clean, non smoking, no pets, economical vehicle. Would make a great , sporty vehicle for a student or commuter.  It had some clear coat peeling off of the top, hood and trunk but we had it professionally stripped and painted recently. Wow! what a difference. Looks new. It runs and drives great and gets great fuel mileage. She averaged 29-30 driving to school about 12 miles away. Highway mileage gets about 34-35 mpg. It has no leaks and is very dry underneath and everything works with no check engine lights. Could not ask for a car in to be in better condition for the year. Still has the original factory window sticker in the glovebox. Originally cost $19,380.00 new.

Cold AC, hot heat, sunroof works great, dual exhaust, KENWOOD AM/FM/CD Player with USB and ipod connection. Cruise, tilt, power windows, power door locks, 60/40 rear seats, remote mirrors, pulse / delay wipers, aluminum/chrome wheels, tires have about 10,000 miles on them. Tires still in great condition. Wheels are in great shape with no road rash. The gravel on the driveway is reflected in the chrome wheels in the pictures. There is not anything wrong with the wheel chrome. Had new front brake rotors and ceramic pads installed about 3500 miles ago.

Clear title with no accidents, floods etc. Take a look at the pictures and see if this is the car for your son or daughter or even you. Car is for sale locally so auction could end early.  Thanks  Keith