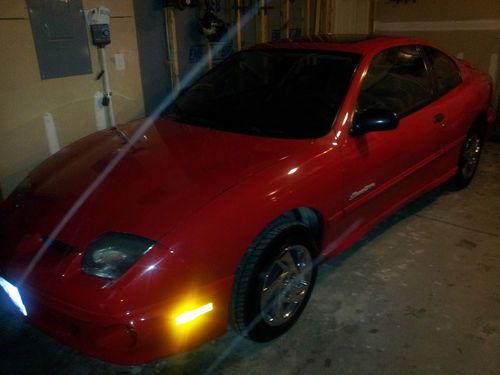 Low Miles for this Red 2002 Pontiac Sunfire. Very Sporty in Great condition. New Tires. AM/FM Stereo with CD Player. Fun to drive. Power sunroof too. Made many trips between Chicago and Indy, including recently. Does have minor dent on left rear. Cracked license bezel, and some scratches on rear bumber that have been touched up, from a light hit accident last year. Not very noticeable. Overall great car. Great first car, and/or Graduation gift. Took pics in garage after full Professional detail interior and exterior. Didn't want weather to ruin it. LOL. First Fair offer will take her. Test drive will show how nice this one is. And/or ask us questions. Fyi. Thanks for your time and interest.