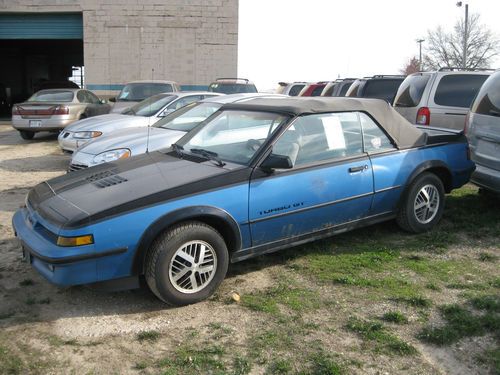 This is a 1987 Pontiac Sunbird Turbo GT Convertible! 4 Cly, 2.0, with a automatic trans, It has around 123xxx miles,PW,PL,TILT,CRUISE,AIR,AM,FM,CD! Missing the face plate for the radio!There is a little rust on the bottom of the doors but NO holes few minor dings and scratches. Interior is in Good condition but the drivers seat has a worn spot in by the seat belt.(see pics),  It is very clean with a few small stains. The tires are almost NEW like 2500 miles on them. And we replaced the transmission. The convertible top is 2 years old. It also is listed on the lot so don't miss out if it sell we will stop the auction! This car runs great! please serious bidders only" Have any ? E-Mail us!!!! Or call from 12 to 6pm central time 319-342-4278 M-F.