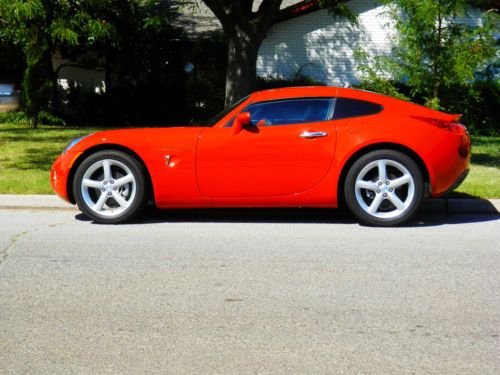 Condition: UsedA vehicle is considered used if it has been registered and issued a title. Used vehicles have had at least one previous owner. The condition of the exterior, interior and engine can vary depending on the vehicle's history. See the seller's listing for full details and description of any imperfections.Seller Notes:"Very near mint. Driven in the rain only one time. Paint is perfect. No chips dints or dings at this time. SUPERB !"

An extreme collectable that will appreciate not depreciate. One magazine editor wrote: If you can find a Solstice Coupe for under $40,000 then you ought to buy it before the prices go from $40,000 to $70,000. One is now listed on line at $75,000. Only 1266 made. 1052 delivered in US. 822 had automatic Trans. 130 were re-sale red. 322 were non turbo charged. Numbers not available for soft top option. Perhaps only a few dozen as this was a $980 option. Folding soft top will make the overall value a little higher in the long run, and this car comes with the soft top. Original purchaser was auto mechanic. I am second owner and 69 yrs old. Car is very peppy. Factory computer chipped at 143 MPH. I had it to 115 and it was pulling fine and felt like it would do the 143. Rear gear is 373 posi. Handles like a go cart. GM dealer told me factory 100,000 mile warranty still good and good from owner to owner. Free deliver up to 500 miles from Oklahoma city. Delivery for a very very small fee over 500 miles. Paint is near mint perfect at this time. No rock chips, dints or scratches. Interior is a tasteful charcoal gray with lighter gray seat inserts. V8 conversions are available thru several venders. Car was never driven in the rain until I got caught in a shower last week. My viewpoint is that this is the best looking car ever made.  LIFE IS SHORT.....BUY THE CAR !