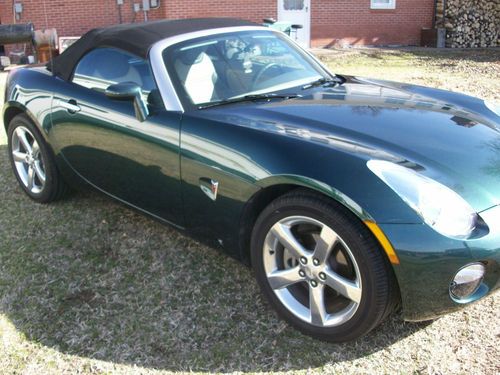 FOR SALE IS A REAL NICE 2007 PONTIAC SOLSTICE CONVERTIBLE.   WE ARE SECOND OWNER  AND WE PURCHASED IT  IN 2008.
NOT USE TO LISTING VEHICLE AND PROBABLY MISSED THINGS , SO IF ANY QUESTIONS PLEASE CALL 918-520-6309. CAR IS THE
VERY BEST WE HAVE OTHER INTEREST NOW AND DON'T DRIVE.  THANKS FOR LOOKING AND BIDDING. $500 PAYMENT WITHIN
48 HOURS AT END OF AUCTION AND BUYER IS RESPONSIBLE FOR DELIVERY. CAR IS LISTED LOCALLY WILL END AUCTION
EARLY IF RESERVE NOT MET