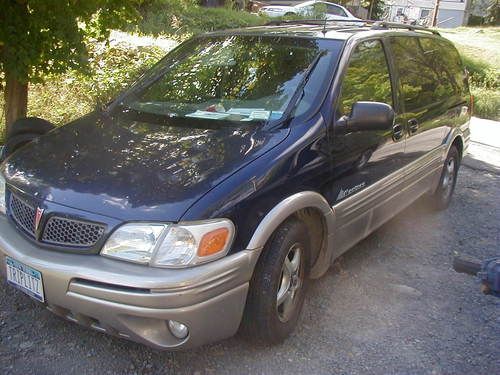 Condition: UsedA vehicle is considered used if it has been registered and issued a title. Used vehicles have had at least one previous owner. The condition of the exterior, interior and engine can vary depending on the vehicle's history. See the seller's listing for full details and description of any imperfections.Seller Notes:"Good van just needs cleaning."

We just don't need it anymore so she can go. This is the extended 8 passenger version. You can drive it home from here if you want. The good: Starts right up and runs good, V6 3400, Automatic, A/C, P/S, P/B,  P/W, traction control, Power door locks, Power side door, CD player, DVD player, removable rear seats, has tow hitch, new tires, new front calipers this year, all fluids were changed recently. The bad: The lights on the radio don't work all the time so you can't see the stations, it needs one O2 sensor, It needs a magor cleaning inside, I think thats it. YOU CAN COME SEE IT ANYTIME JUST SEND YOUR # TO SET UP AN APPOINTMENT. Must be paid for in 7 days. No Paypal. Checks must clear etc. For sale local. Email any questions. Buyer arranges and pays all shipping if not picked up. Thanks