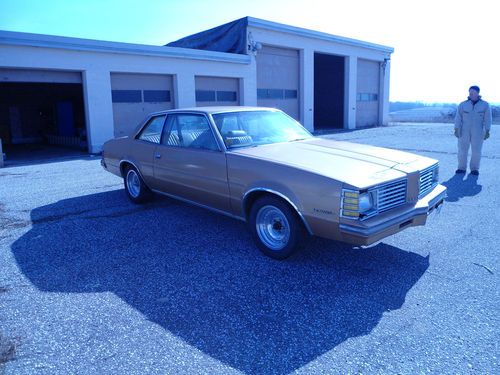 Up for auction I have my 1980 Pontiac LeMans. I bought this car for a project car and don't have time to work on it, so I'm getting it out of my garage. My loss, your gain. This car does need work (as shown in the pictures) The body is in decent shape with a few small dings and scratches but with solid quarter panels. I do have the parts to fix the headlight trim and grill as well as the interior door latch. MOTOR CHOSEN FROM MENU IS NOT CORRECT, BUT I HAD TO CHOOSE ONE OF THEIRS TO CONTINUE LISTING PROCESS The motor is a 350 "rocket" that came out of a '69 olds cutlass. It is missing the intake manifold and carb. It has a 4-speed manual transmission. The interior needs a little work, but it is useable the way it is. (no huge holes, just a few rips and rub spots) This car will need to be towed or trailered as it is a NON RUNNER at this time. This car is being sold AS IS WITH NO WARRANTY! Buyer responsible for pick-up or shipping. (I could deliver it for $1.50 per mile as I do drive truck over the road) I will consider REASONABLE offers. If you have questions, feel free to call me at 402-690-7740 my name is Mark   Thanks for looking and happy bidding!
UPDATE: I HAVE BEEN TOLD BY A COUPLE PEOPLE THAT THE MOTOR IN THIS CAR IS A BUICK MOTOR NOT AN OLDS, SO DECIDE FOR YOURSELF FROM THE PICS. I WAS GOING TO PUT A DIFFERENT MOTOR IN IT ANYWAYS, SO WHAT YOU SEE IN THE PICS IS HOW YOU WILL GET THE CAR! THANKS FOR THE INFO GUYS! :)