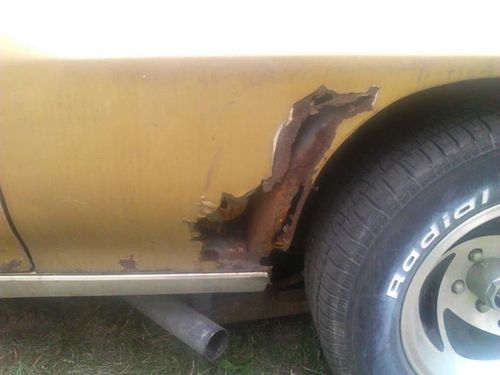 Condition: UsedA vehicle is considered used if it has been registered and issued a title. Used vehicles have had at least one previous owner. The condition of the exterior, interior and engine can vary depending on the vehicle's history. See the seller's listing for full details and description of any imperfections.Seller Notes:"Has rust holes on both quarters n trunk pan needs to be replaced. Has a 350 in it not sure of what the trans is but i kno its an auto. Interior is in good shape for the year, the only rips n tears that it has is drivers side seat."

Has rust holes on both quarters n trunk pan needs to be replaced. Has a 350 in it not sure of what the trans is but i kno its an auto. Interior is in good shape for the year, the only rips n tears that it has is drivers side seat.  It starts runs sounds great has the dual side pipes.. Is a project car have another 70 Lemans with a 400 big block needs new roof want to sell both as pair dnt kno how to list both at same time but would love to sell pair for 5500 really if intrested itd be eaiser to call me at 9896307498 alot better thn dealin with all this. But as always first come first gets it! movin to texas they both need to go