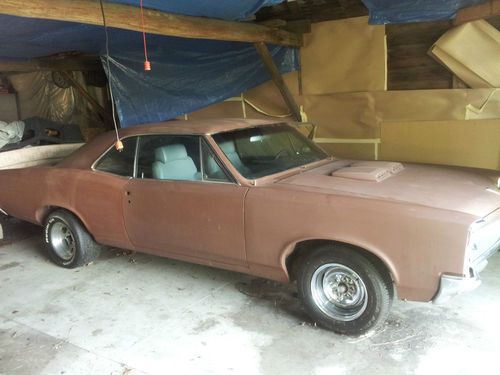 Condition: UsedA vehicle is considered used if it has been registered and issued a title. Used vehicles have had at least one previous owner. The condition of the exterior, interior and engine can vary depending on the vehicle's history. See the seller's listing for full details and description of any imperfections.Seller Notes:"Gas tank is not in car. Needs some trunk work. Nothing too serious. Car runs (currently runs off of separate tank so I can move it around). Body and frame solid."

Solid body 1966 Pontiac Le Mans.  Has some Tempest parts on it.  Engine is believed to be an Olds 442 motor, but I haven't verified that.  It is definitely a 455 with a Holley intake and carb (800 cfm).  Motor runs well.  Transmission is good with small stahl (probably 2200 to 2400).  Interior has new carpet, original console with B&M ratchet, 79 Trans Am steering wheel, front seats not original (Power Oldsmobile seats, not installed, just sitting in car for now).  Brakes are all new - just recently installed new brake drums, pads, and wheel cylinders.  Rear end is single wheel drive, not sure of gear ratio.  Brand new windshield - just installed.  Gas tank is not in car.  Needs some trunk work. In primer now, needs paint.  Body and frame solid.  Hood shown in pictures is off of another car.  I will be keeping that. I was in the process of putting a 1970 Trans Am shaker scoop in the original hood.  I have all of the stuff, it's just not been fully completed.  That's what you will get if you purchase the car.  Please call Cliff with any questions at (616) 842-4026.