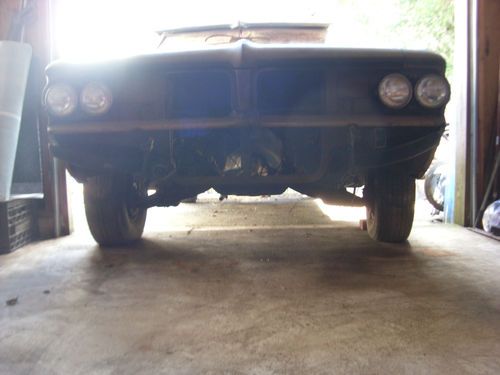 Condition: UsedA vehicle is considered used if it has been registered and issued a title. Used vehicles have had at least one previous owner. The condition of the exterior, interior and engine can vary depending on the vehicle's history. See the seller's listing for full details and description of any imperfections.Seller Notes:"1964 Pontiac Le Mans Convertible Body VIN # 824P257505 in Burgundy. Chassis and many body parts VIN # 824P210445. Project car, needs interior convertable top, body bushings, trunk panels and support,lower rear quarter panels rusted with previous signs on body work, and windshield. Engine not currently in car but will come with a 350 pontiac engine. Once had two cars, stripped and still have the parts from the second car. Doubles of chrome trim, one set very good, one set not so good. Other various pontiac parts available. Call for more info or to view the vehicle. Claude : 516-967-1119"

1964 Pontiac Le Mans Convertible Body VIN # 824P257505 in Burgundy. Chassis and many body parts VIN # 824P210445. Project car, needs interior convertable top, body bushings, trunk panels and support,lower rear quarter panels rusted with previous signs on body work, and windshield. original engine not currently in car but will come with a 350 Pontiac engine. Once had two cars, stripped and still have the parts from the second car. Doubles of chrome trim, one set very good, one set not so good. Other various parts available. Call for more info or to view the vehicle. Claude : 516-967-1119