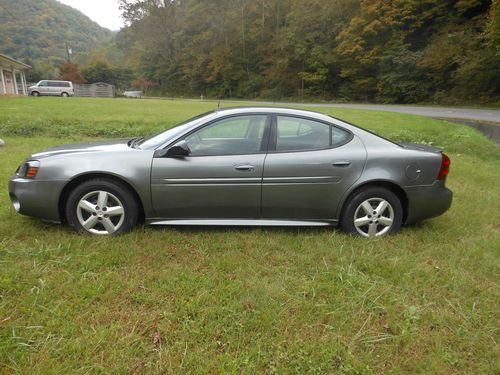 Condition: UsedA vehicle is considered used if it has been registered and issued a title. Used vehicles have had at least one previous owner. The condition of the exterior, interior and engine can vary depending on the vehicle's history. See the seller's listing for full details and description of any imperfections.Seller Notes:"NORMAL WEAR AND TEAR NO MAJOR DEFECTS OF ANY KIND"

2005 PONTIAC GRANDPRIX I BOUGHT THIS CAR AT A BANK AUCTION WITH A BAD ENGINE I REPLACED THAT ENGINE WITH ONE THAT HAS 66000 MILES ON IT AND I HAVE THE PAPER WORK ON THAT ENGINE I OWN A REPAIR SHOP AND BOUGHT THIS FOR MY WIFE BUT SHE FOUNT HER A DIFRENT CAR AND NOW IM SELLING THIS ONE WAY BELLOW BOOK TRYING TO GET SOME OF MY MONEY BACK RUN'S GREAT HAS A NEW VIRGINIA INSPECTION STICKER BUY IT AND DRIVE IT HOME ANY QUESTIONS GIVE ME A CALL 1 276-530-9007 ASK FOR BRIAN  9AM TILL 10 PM EASTERN STD TIME .. SHIPPING IS BUYERS RESPONSIBILITY I WILL HELP IN ANY WAY I CAN WITH SHIPPING WITH IN A REASON . CAR IS SOLD AS IS WHERE IS .A NONE REFUNDABLE $500.00 DEPOSIT IS REQUIRED WITH IN 24 HOURS OF AUCTION END . THE CAR IS FOR SALE LOCALY SO I RESERV THE RITE TO END THE AUCTION EARLY IF IT BECOMES UNAVABLE .