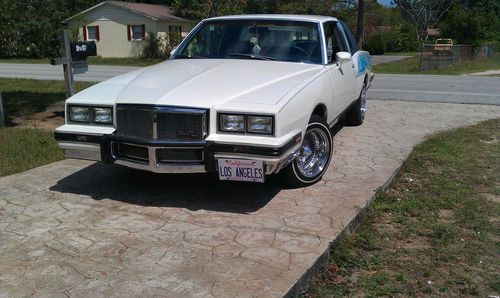 I have a 1983 Pontiac Grand Prix for sale car is in great conditions garage kept smoke and pet free car  It recently went into its second turn it runs great no check engine lights it has a very miner tranny leak nothing major and it has a small chip in the paint barely noticeable i circled it red in one of the pics and will need a smog pump belt if you want to pass the test i took it off as we don't do smog tests in Florida it also has custom air brushing on both sides that could be easily be painted over if you want to make it back to original i believe im the 3rd owner of this car it is rust free it has never seen snow! it has very little surface rust that can be sanded and spray painted very easily nothing major heat/AC blows cold it has been converted to r34 with new pump also new water pump,fan clutch,distributor,and belts it has 14x7 chrome wire wheels tires have about 75% tread  left on them runs like factory! overall very good reliable car for being 30 years old its already an antique as you can see the plates in the photos  this car is a real head turner!! thanks for looking and no returns!